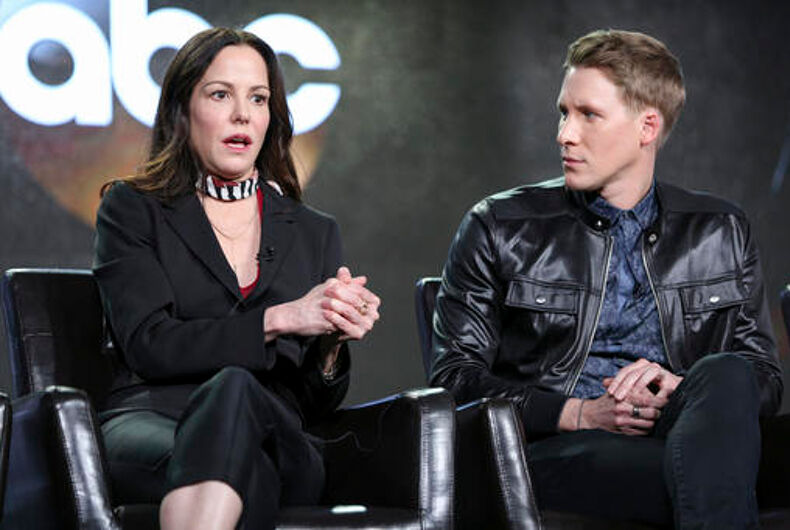 Mary-Louise Parker, left, and Dustin Lance Black speak at the "When We Rise" panel at the Disney/ABC portion of the 2017 Winter Television Critics Association press tour on Tuesday, Jan. 10, 2017, in Pasadena, Calif. Photo: (Photo by Rich Fury/Invision/AP)

PASADENA, Calif. (AP) — Oscar-winning screenwriter Dustin Lance Black says his upcoming TV miniseries about the gay rights movement is for everyone, up to and including the incoming president.

“I think there’s a lot of people who voted for Donald Trump who will love this show,” Black told a TV critics’ meeting Tuesday. “I didn’t write this show for half the country. If Donald Trump watches the show, I think he might like the show.”

When We Rise, airing Feb. 27 to March 2 on ABC, recounts the LGBT civil rights movement and those involved from the mid-20th century to present day. The cast includes Guy Pearce, Rachel Griffiths, Mary-Louise Parker, Ivory Aquino and Michael Kenneth Williams.

Black said the show already has come under online attack from members of the alt-right movement, but said that “the show is not a war. We are not against anyone.”

The project was initiated four years ago and without anticipation of the current political climate, Black said.

He wrote it for members of his own family, he said. The writer, who won an Academy Award for 2008’s Milk, described growing up in a “religious, conservative, military” household in the South.

His message to his cousins, aunts, uncles and others is, “Hey, we have more in common than we think and we speak the same language,” Black said, adding that he treasures his relatives.

The series’ perspective is universal, Black said, calling it a “conversation about what it’s like to be a minority in this world” and the importance of working together.

Williams (Boardwalk Empire, 12 Years a Slave) said the miniseries offers “stories of triumph and courage this country was built” and is a timely celebration of American diversity and unity.

When Black and the actors were asked about whether Hollywood is out of touch with middle America, Griffiths responded.

“This show isn’t four nights of telling the middle how they should think and feel. It’s not an education, propaganda tool, which I’m sure the alt-right will say it is,” said the Australian actress (Six Feet Under).

Instead, she said, it’s an opportunity to understand the lives of others. When she was a “little Irish Catholic girl” and watched the slavery epic Roots, she learned what it was like to be owned by another person and “that affected me for the rest of my life.”