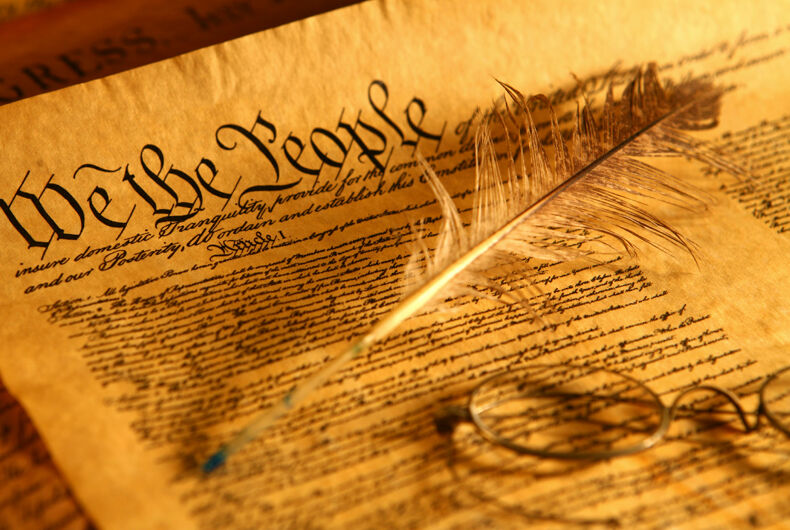 JEFFERSON CITY, Mo. (AP) — The November election put Republicans in full control of a record number of state legislatures around the country, a level of power that gives the party an unprecedented opportunity: change the U.S. Constitution.

Republicans already control Congress, the White House and more governors’ offices than they have in nearly a century. But it’s the state legislatures that hold perhaps the greatest promise for lasting change.

The GOP now holds numerical majorities in 33 legislatures, one shy of the two-thirds required to initiate a convention on constitutional amendments. There is no credible talk of using that power for amendments on hot-button social issues, such as banning abortion or gay marriage. But conservatives have a list of bread-and-butter governing issues they would like to see enshrined in the Constitution.

One, to require a balanced federal budget, is already approaching the level of support that would trigger a convention. Beyond that, a major state-level push is planned during 2017 for a constitutional convention that could also consider amendments to impose term limits on members of Congress and reign in various federal powers.

President-elect Donald Trump has pledged support for an amendment on congressional term limits.

“The possibility of constitutional change is in the air,” said law professor Jeffrey Rosen, president and CEO of the National Constitution Center in Philadelphia, a nonprofit museum that is hosting academic debates and symposiums about the efforts to amend the Constitution.

The U.S. Constitution has been amended 27 times since it was ratified in 1788, and its Article V spells out two ways to propose amendments. By a two-thirds vote of each chamber, the U.S. House and Senate can refer an amendment to the states. Or two-thirds of the state legislatures can request that Congress call a convention of the states.

Both scenarios require three-fourths of the states — or 38 — to ratify an amendment before it takes effect.

If the supporters of a balanced budget amendment succeed, it would be the first time in the nation’s history that states initiated the process. That scenario has become more likely as a result of the November election.

It takes 34 states to trigger a convention for constitutional amendments, meaning a unified Republican push would need the help of only a few Democrats in a single state to reach the mark.

“The overwhelming success of one political party at the state level is something of real constitutional significance,” said Akhil Reed Amar, a constitutional law professor at Yale University.

Every state except Vermont has some sort of balanced budget requirement, according to the National Conference of State Legislatures. The U.S. government does not, but not everyone agrees that’s a problem. During recessions, for example, federal government spending can help drive the economy even if it means spending at a deficit.

Twenty-eight state legislatures already have approved measures calling for a convention to propose a federal balanced budget requirement, although they use a variety of terms that could raise legal questions about whether they all count toward the threshold.

But Republican control is no guarantee of success.