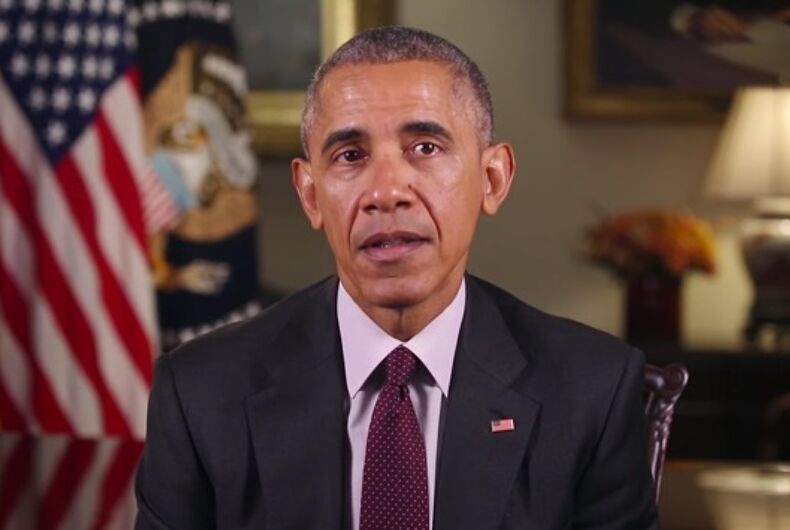 President Obama issued his final World AIDS Day message this morning. The two and a half minute video highlights his administration’s accomplishments fighting HIV and notes the work still undone.

“Together, we can do this,” Obama says in the video. “And long after I leave this office, you’ll have a partner in me.”

Via press release from the White House:

December 1 marks World AIDS Day across the globe, and serves as a way to recommit ourselves to ending HIV/AIDS as a public health threat. Throughout his Administration, President Obama propelled America’s leadership on HIV/AIDS by both developing the first comprehensive National HIV/AIDS Strategy for the United States and expanding our investments in the President’s Emergency Plan for AIDS Relief (PEPFAR) and the Global Fund to Fight AIDS, Tuberculosis and Malaria. This World AIDS Day, we mark the successes we’ve made together, both domestically and globally, by demonstrating leadership, enhancing our commitment, and achieving measurable impact. We also recognize the challenges in reaching affected communities, and continued work needed to achieve our 2020 national goals and end AIDS worldwide by 2030.

The majority of people living with HIV reside in low- to middle-income countries. The United States is leading the world’s response to this crisis, working in partnership with countries and communities to end the AIDS pandemic by 2030. Including the President’s FY 2017 Budget request to Congress, the President’s Emergency Plan for AIDS Relief (PEPFAR) is investing over $70 billion from FY 2004 through FY 2017 to accelerate our impact and work to control the epidemic to accelerate our impact and work to control the epidemic with comprehensive and data driven efforts. PEPFAR’s success is measured in saving lives and changing the course of the pandemic. Building on the work of the previous Administration, we have exceeded our 2016 target for treatment and are now supporting nearly 11.5 million men, women and children across the globe with life-saving anti-retroviral treatment.