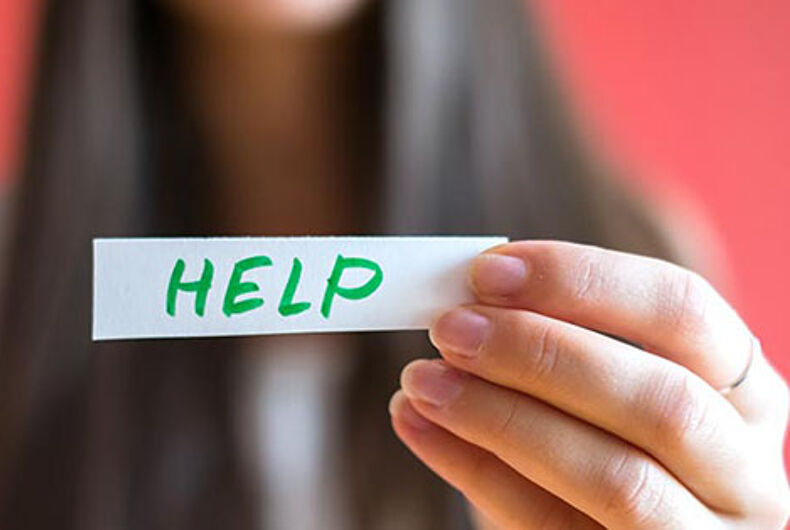 The phones have been ringing off the hook at the Trevor Project offices in West Hollywood, Calif. ever since Election Day, and those working in the crisis hotline call center say there is mounting fear among LGBTQ youth.

“A lot of fear,” said Jean to KPCC-FM, a Southern California Public Radio station. “Jean” is not her real name; the station provided pseudonyms to those who spoke with them to shield their identities.

In the 18 years since its founding, the Trevor Project has responded to all kinds of fear, from coming out to peer pressure and parental rejection to suicide.

But this is different, said another one of the counselors.

“I don’t think I heard politics mentioned that much before the election,” said Sadie. “But when you have 12- and 13-year-olds who are calling and freaking out, that has struck me.”

They’ve never seen anxiety like this before, the counselors told the station.

The previous record for the highest number of calls received was set in June, following the tragedy at Pulse Nightclub in Orlando, Fla., where a gunman killed 49 people, almost all of them LGBTQ.

In fact, the number of calls in the week post-election set a new record in the organization’s history.

Defenders of President-elect Donald Trump say he hasn’t done anything to warrant such fear and anxiety. They point to his statements on the campaign trail and at the Republican National Convention in July:

“I will do everything in my power to protect our LGBTQ citizens from the violence and oppression of the hateful, foreign ideology, believe me,” Trump promised.

But what about protecting us from violence and oppression here at home? And as KPCC reported, it’s the people he’s chosen to help run his White House that’s driving up anxiety, like Vice President-elect Mike Pence.

Although he has never explicitly mentioned conversion therapy, callers to the Trevor Project point to Pence’s anti-LGBTQ record in Congress and as governor of Indiana as an indicator that he will use his influence in the Trump White House to lead to its expanded use throughout the nation. Five states and the District of Columbia currently ban the practice, which has been denounced by the American Psychological Association.

And despite their youth, the counselors say the callers are very well-informed.

“I feel like they’re very aware of what’s happening in the country. It seems to be creating a sense of anxiety, almost fear,” says Robert. “It’s hard for me to hear young people speaking in a manner that lacks hope.”

The counselors work with callers to find ways to relieve their worries about how they might be affected by Trump administration policies.

“I remember a day when you could be fired for being gay,” said Robert, who lives in California where anti-discrimination laws protect sexual orientation and gender identity. “Those were some really dark days and we’ve really come a long way. We’re not going back. Always hopeful. Always.”

American hospitalized after Berlin terror attack that killed his partner