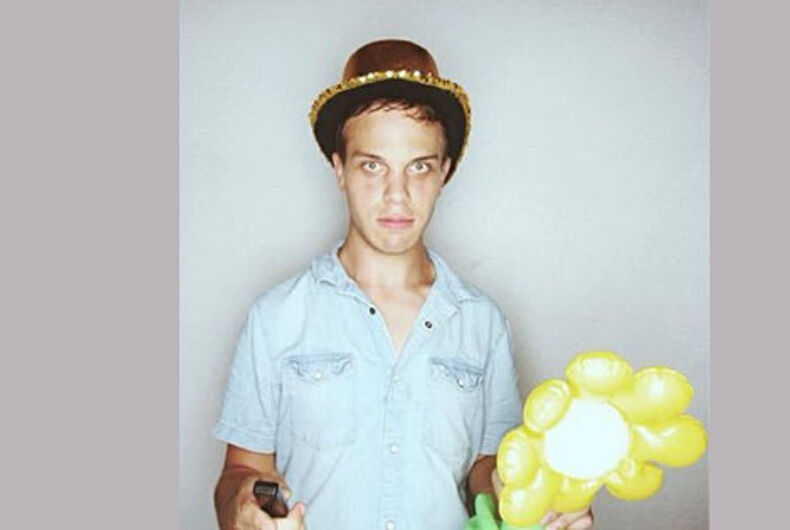 It was the day after the election, and there I sat on the bus, lost in thought on my way to work. Outside my window, Trump-Pence signs, ever so mockingly, littered the side of the highway. Each one seemed to blur into the next.

“I wonder how many celebrities will actually move out of the country now?!” I heard a fellow passenger joke.
“Yeah, better to be rid of them!” chimed in the driver.

For many in my home state of Montana that day, Trump’s win was cause for celebration. People, who only days before seemed agitated by such a never-ending election, were suddenly beaming. “I’m excited for what he is going to do for this country,” I heard one radio broadcaster announce.

Even my family, passionate Trump supporters, couldn’t help but cheer, despite the fact that I am a member of not one but two communities he openly mocked during his presidential campaign—gay and disabled.
“I know you are sad,” my mom texted me that morning. “I am sorry for your loss.”

“Congrats on your win,” I responded.
Even though I knew my mother’s heart was in the right place, it was still hard to take.

It was real. Donald Trump was going to be our president; and here I was, a gay liberal snowflake with cerebral palsy, stuck in the deeply red state of Montana. Montana, the same state that, as my boyfriend described, has more Jesus and anti-abortion signs than people. The same state that, up until 2013, still had a law deeming gay sex a crime despite the whole Lawrence V. Texas SCOTUS ruling that struck down sodomy laws back in 2003.

It all seemed so hopeless. One month later, it still does at times. The night after the election, I posted a status on Facebook, which looking back, reads like a dramatic inner-monologue straight out of Gossip Girl:

Dramatic or not (xoxo, you know you love me!), the truth is, Montana can be an odd place to be gay, especially post-election.While it’s previously made strides for the LGBTQ community–we can have sex legally now!–there still remains this ultra-conservative yet sometimes-acceptable mentality. For instance, you can hold hands, as long as you’re careful with where. Parking lots are totally okay, but once you’re inside the grocery store, say, picking out avocados together, that’s another story. Once, when my boyfriend and I got “too close” in a store, a stranger offered us “eternal life” if only we accepted Jesus into our hearts.

When we go to bars, people will look at us with their heads tilted, trying to figure us out. “Are you brothers?” they’ll ask. When we tell them no: “Oh, just buddies?” Sure, something like that, I’ll think.

Not to mention the hilariously offensive low-key homophobic remarks I often hear, sometimes from my own friends. “I don’t care if someone is gay; like, with you, you’re cool!” they’ll say, as I wait for the bigot-hammer to fall. “It’s when they start acting like they’re girls and/or wear makeup that I’m like, sorry no.” Ding ding ding! Please excuse me while I embrace #THERAGE.

And then there are those people, usually straight and more often than not white, who proclaim, “Who cares what people think? I would just be yourself and tell people you are gay!” But that’s easy to say when you’re not the one who has to deal with the consequences, whatever those may be. And it is that unknown that is perhaps the hardest part–the unknown of how someone may react when you tell them you’re a guy who likes other guys and that you have a–gasp!–boyfriend.

It can be truly isolating, made even more so after this election.

At times, I feel as if I’ve been forced back in the closet, having to hide like I did when I was an awkward, lonely teenager trying to figure out where I fit in in the world. I think about my mom’s text the day after the election—“Sorry for your loss”—and wonder if she really truly understands everything that I’ve lost, or stand to lose in the future.

I suppose I could always move. But until then, it would be really nice if I could hold my boyfriend’s hand while we pick out avocados at the grocery store. Is that too much to ask? Perhaps that is a question for our next president.