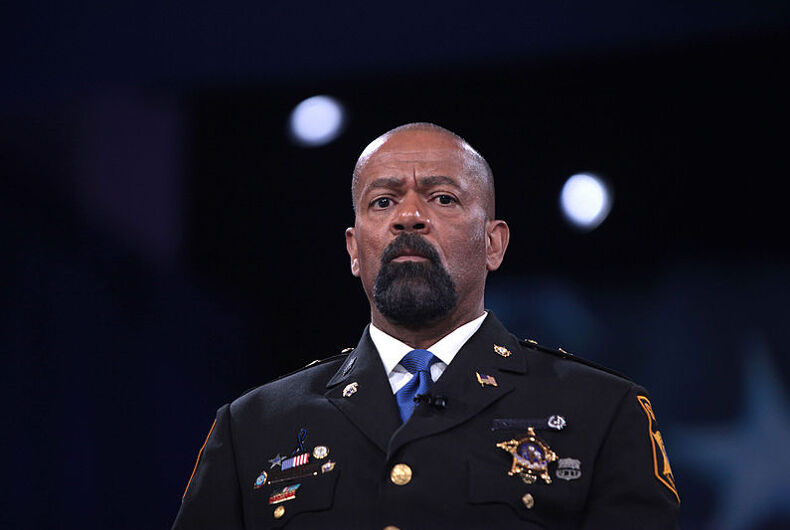 Donald Trump, pretend friend to “the gays” during the campaign, has been steadily filling his cabinet with picks that have worrying histories when it comes to LGBTQ rights, not to mention race relations.

It appears he is considering yet another one in David Clarke, the Sheriff of Milwaukee County, Wisconsin, who is reportedly being vetted to possibly run the Department of Homeland Security.

Clarke, who spoke at the 2016 Republican National Convention where Trump accepted his party’s nomination, characterized the mass shooting at the Pulse nightclub as a “distraction” and went after trans people in an interview in June of last year.

Clarke made the remarks on a podcast from TheBlaze Radio Network.

“We allowed the left to use gun control as a shiny object to distract us from Mrs. Bill Clinton’s flaws,” Clarke said, reports Pink News. “We were hammering her over Benghazi, and what the left do is exploit these distractions, something came up, a shiny object…they know they can bury us in this thing that isn’t going to change anything.”

He also claims it “got us off of the momentum about the Clinton email scandal.”

“We could have talked about a lot of things around Orlando, the failure of Barack Obama…we missed that opportunity,” he continued. “When the Democrats throw a shiny object out there, we need to take that and turn it into tying it around the neck of Mrs Bill Clinton.”

His comments on that same program concerning transgender individuals referred to them as among those living a “freakish lifestyle” that the left wishes to promote in order to win votes.

“Too often in this assault on the First Amendment, and this very totalitarian attitude from the left that any freakish lifestyle, any marginal lifestyle, is now considered part of the norm, and they’re shoving it down our throats,” Business Insider reports Clarke saying. “So if you’re not careful when you engage in this conversation, they’ll look for the trap, and they’ll catch you saying something that’s clumsy or not well articulated, and then they’ll just attack you — they’ll attack you with it. ‘Transgender phobic’ and all this other nonsense.”

Clarke read from an article published by Walt Heyer, a former transgender author whose claims have been debunked.

The article, published in the Daily Signal, claimed that trans people are more likely to have “psychiatric diagnoses,” that trans identities correspond with childhood trauma “100% of the time,” and that trans people “need psychotherapy, not access to cross-sex restrooms.”

“We will probably not get to the proper course of treatment for these individuals because the left, as you know, is on a political crusade with this, looking to push any lifestyle as mainstream in an effort to gain political power, because they seek their vote,” Clarke said.

“We need to push back on this, not because you or I don’t like transgender individuals. Because I want to make sure they’re getting the proper treatment before embarking on this irreversible medical procedure, that’s all,” he added.

Ben Carson, whom Trump appointed as secretary of the Department of Housing and Urban Development, has made similar comments, calling LGBTQ people “abnormal.”