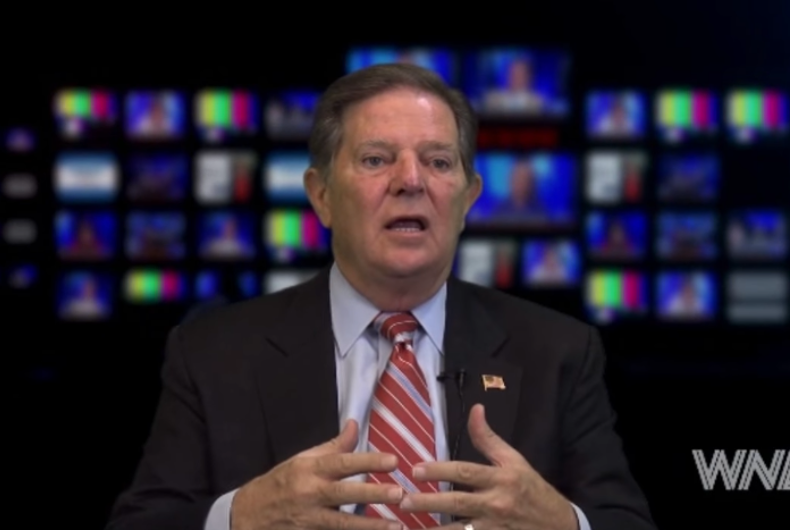 Former Republican House Majority Leader Tom DeLay appeared on WorldNetDaily to promote his new book, Revival! Revolution! Rebirth!, where he proclaimed that God has delivered a “clean slate” of a man in Donald Trump that will allow the religious right to enact the laws they wish to use to reshape America.

“Now that Trump is elected, I’m very excited about it because I see now what God is doing,” he said. “First of all, He stopped the left in its tracks and He stopped Hillary Clinton, and put a man in place that was a strong leader, which the country was begging for, and it didn’t matter what his policies were. People wanted a huge change in the direction of the federal government.”

“I think I see what God’s intentions were. Here’s a man that basically is a clean slate and we, being Christian constitutionalist conservatives, have an opportunity to fill in that slate,” DeLay continued, commending his cabinet choices so far.

“We, being strong Christians conservatives, are going to have an opportunity to really turn this country around in a bold way,” he concluded.

He said Trump “is not a conservative” back in August, adding that he was “becoming more and more conservative.”

While he showed enthusiasm speaking with WND, DeLay did recently criticize Trump’s involvement in the Carrier deal, saying inserting the federal government had “real serious unintended consequences” by giving them an unfair advantage.

Watch video of DeLay’s comments below.

Vote now: Who should be LGBTQ Nation’s Person of the Year?