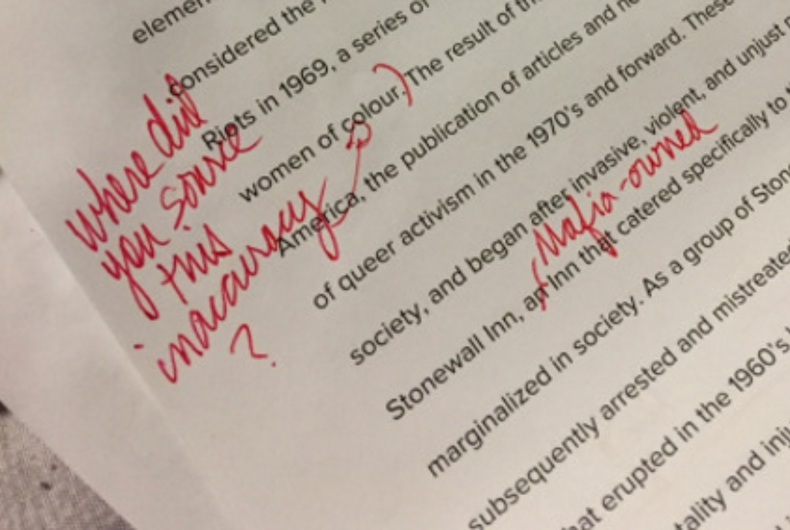 A college student received a surprising note from her professor regarding the Stonewall riots on an essay she wrote about the role of anger in activism.

She wrote that the action was “against police raids lead by transgender women of colour.”

“Where did you source this inaccuracy?” the professor wrote beside the sentence in red ink.

He also added that the bar was mafia-owned, which was true of the majority of gay bars in New York at the time.

The student, Tumblr user huxsir, posted the paper with the caption, “Anyway so time to write a sourced email to my professor about the Stonewall riots I guess.”

She did so, and shared it as well.

She informed her teacher that Marsha P. Johnson and Sylvia Rivera were both primary players in the riots, and points out that often they are left out of the narrative in media representations of the event.

For instance, the 2015 movie “Stonewall” received criticism from the general public and film critics alike for its focus on a white, gay male protagonist and what they felt was an under appreciation of the role Johnson and Rivera played.

He responded, which amounted to arguing semantics.

The woman, who decided not to divulge her name or university to protect the identity of her professor, told BuzzFeed News that his use of the word “inaccuracy” and the inclusion of the fact that it was mafia-owned justified an email response.

She said there are no hard feelings.

“Despite any grievances/frustrations I may have, he’s marked my work fairly,” she said. “I was a bit miffed that he’d called me out as being incorrect, and set out to prove him wrong – with sources.”