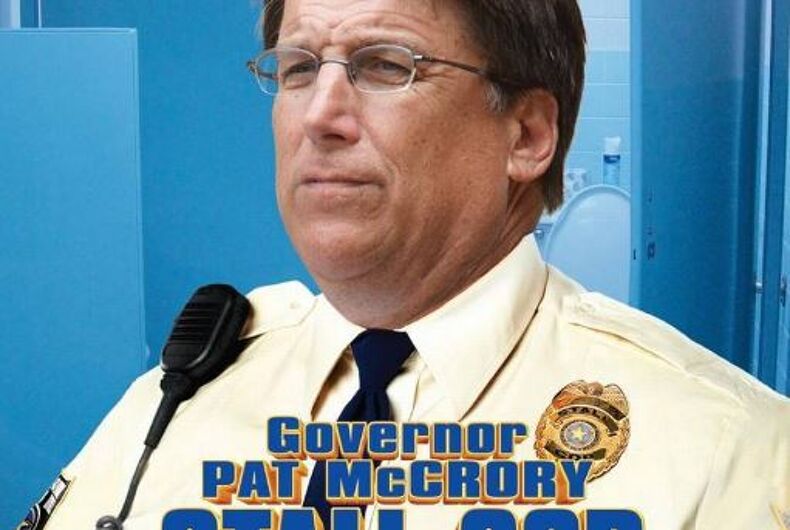 No, not the gubernatorial race, which he is refusing to admit he has almost certainly lost, down by thousands of votes to his Democratic challenger, Attorney General Roy Cooper.

McCrory is not bowing out gracefully, instead demanding recounts and making claims of voter fraud.

But he did just win something: the ignoble “honor” of a spot on MAD Magazine‘s annual “20 Dumbest List,” for signing the discriminatory House Bill 2 (HB2) into law.

McCrory landed in the 11 spot, where he is cast as “Stall Cop,” in a spoof of the Paul Blart Mall Cop movies, with the tagline: “Keeping North Carolina Bathrooms Safe from Transgender Persons Who Want to Take a Whizz.”

The bill McCrory signed, HB2, requires transgender people to use the bathrooms corresponding to the gender on their birth certificates when in government-owned buildings. Private businesses are left to make their own rules regarding the issue. Further, it invalidated non-discrimination ordinances passed by cities and municipalities in the state, taking away protections from the LGBTQ community.

Boycotts over the law have cost the state millions of dollars, as the magazine notes, as well as hundreds of jobs.

In March, at the urging of Gov. Pat McCrory, North Carolina passed a law saying individuals could only use restrooms that corresponded to the sex listed on their birth certificate – a law many saw as discriminating against the LGBTQ community. So far, McCrory’s potty talk the state hundreds of millions of dollars in business, tourism and federal funds, and neither the state’s Attorney General nor law enforcement agencies will enforce it. So it may be up to McCrory himself to travel the state, poking his head into as many restrooms as he can, making sure they’re being used only by those he approves of. If you ask us, McCrory’s behavior is exactly the kind of creepy bathroom-meddling that should have a law passed against it.

Critics have been telling him it is time to move on.