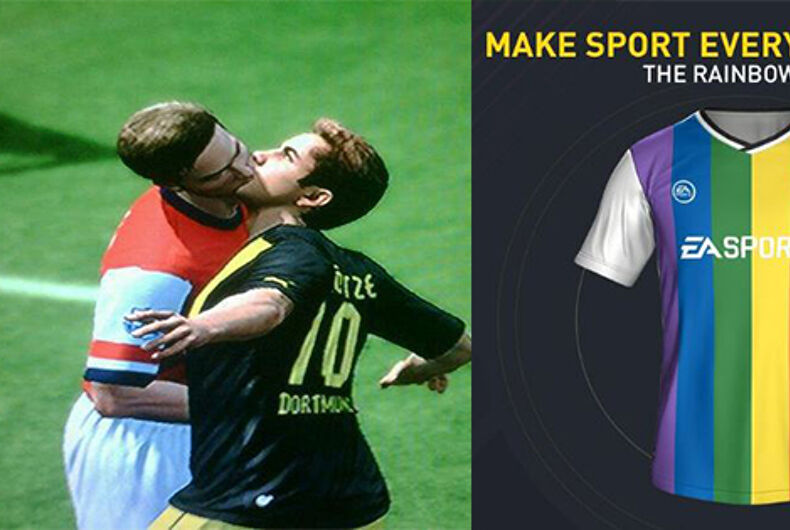 Russian MPs have asked the state communications oversight and state consumer protection agencies to look into the possibility that FIFA 17 is promoting homosexuality, in violation of laws prohibiting so-called gay propaganda passed in 2013.

Players of FIFA 17 were able to obtain free rainbow colored uniforms for players in the game’s ultimate team mode. The feature ended Nov. 28, but that appears to be what upset the Russian MPs.

Not, it should be noted, the glitches in FIFA throughout the years that have made it appear as if players are kissing.

Show your support, get your FREE Rainbow kit in FUT now! More on the #RainbowLaces campaign: https://t.co/2NohXaloXe pic.twitter.com/xSbY9G8wAp

United Russia MP Irina Rodnina, an Olympic gold medalist, told Izvestia that the authorities needed to “verify the possibility of distributing this game on the territory of the Russian Federation.”

“Every state has its internal laws and order; they need to be obeyed,” she added.

Communist MP Valery Rashkin said authorities should order the game’s developer to “introduce changes to the programming code or the age classification of this information product, and if it refuses, adopt corresponding restrictive measures.”

The 2018 World Cup will be hosted in Russia, and FIFA asked for clarification regarding Russia’s gay propaganda law in 2013.

“Russia has committed to provide all visitors and fans with a warm welcome and ensure their safety” during the month-long tournament, FIFA said at the time, adding that “FIFA trusts that the 2018 FIFA World Cup hosts will deliver on this promise.”

Russia previously got itself all worked up over U2’s “Songs of Innocence” cover.