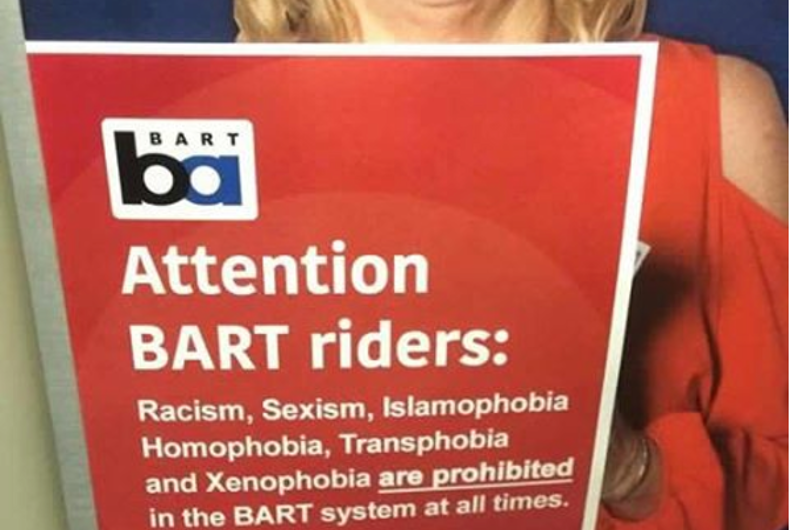 Public transit users are accustomed to signage reminding them to mind their manners — typically by giving up seats for pregnant women, the elderly, and people with disabilities — or to keep an eye out for suspicious behavior, but a new flier is popping up on the Bay Area Rapid Transit (BART) with strong words about bigotry.

“Racism, Sexism, Islamophobia, Homophobia, Transphobia and Xenophobia are prohibited in the BART system at all times,” the official-looking, but not BART-sanctioned, poster reads. The give-away is at the end: “Get your shit together.”

BART riders interviewed by the East Bay Times said they found the guerrilla campaign refreshing, especially in light of an apparent uptick in hate crimes and harassment following the election.

“I thought it was just what we all need to hear,” Oakland resident and BART rider Chris Fiorentini said. “Certainly in light of all the bullshit hate crimes and bullying that’s gone down since Trump was elected. …It was energizing to see an effort to push back.”

Video of an Assyrian woman being harassed on BART two days after the election has gone viral, receiving millions of views and tens of thousands of shares.

The BART system is working on it’s own campaign to oppose bigotry, albeit with milder language. Spokeswoman Alicia Trost told the East Bay Times it will be “a message about how threats will not be tolerated, and we are a community of riders, and we celebrate diversity.”