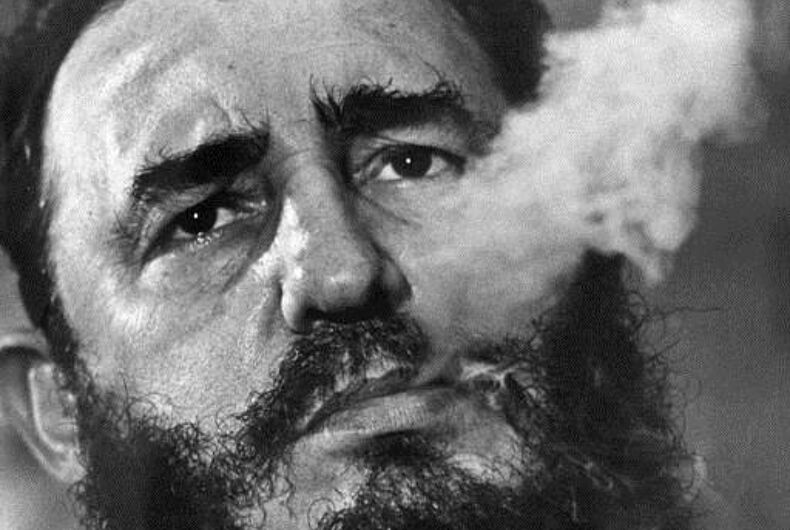 NEW YORK (AP) — As a prominent advocate for human rights, the poet Rose Styron knew well the abuses in Fidel Castro’s Cuba and the censorship of artists and publications with dissenting views. But when she and her husband, author William Styron, were invited to meet him in 2000 she didn’t hesitate to accept.

“He was an interesting, controversial, obviously very intelligent and charismatic figure,” she says of Castro, who died Nov. 25 at age 90. “And in the back of my head, I was also thinking there might be a way to persuade him not to put people in prison for free speech.”

For the Styrons and other artists, Castro was a contradiction they never quite resolved, a man equally hard to embrace or to ignore. He was the bold revolutionary who defied the U.S. government and inspired the left worldwide and the long-winded despot who drove out Eliseo Alberto, Daina Chaviano and other prominent writers and reminded artists of the right-wing leaders they had traditionally opposed.

But Castro was intriguing to the creative community in part because he was intrigued in return. Ernest Hemingway fished with him. Jean-Paul Sartre and Simone de Beauvoir were early visitors after Castro took power in 1959 and Gabriel Garcia Marquez a longtime supporter. Dizzy Gillespie, Stan Getz and other jazz musicians performed in Cuba. Norman Mailer, who met Castro in the late 1980s, would list him along with Charlie Chaplin, Muhammad Ali and Ezra Pound as among the four great geniuses he knew personally.

Many had mixed feelings. “Ironweed” novelist William Kennedy shared happy memories of speaking for hours with Castro when both were at the home of Garcia Marquez, but also called some of his actions “abhorrent.” Harry Belafonte discussed everything from rap music to Hollywood movies with Castro, but could never fully accept him.

“Fidel was so charismatic, his energy so powerful, his legacy in some ways so admirable, in other ways so sad,” Belafonte wrote in his memoir “My Song,” published in 2011. “I genuinely liked him, but I can’t say he was my role model.”

Belafonte and others followed a similar pattern with Castro, initial exhilaration over the Cuban revolution giving way to disillusion, if not outright rejection. Todd Tietchen, author of “The Cubalogues: Beat Writers in Revolutionary Havana,” says that Allen Ginsberg and other poets were drawn to the “politics of style — beards, berets, long hair” that Castro and his ally Ernesto “Che” Guevara helped personify. But while visiting in the mid-1960s, Ginsberg saw gays rounded up and sent to work camps. He quickly, and publicly, became a government critic.

“He called Castro’s heterosexuality in question, confessed that he wanted to sleep with Che, and challenged the Castro government to invite The Beatles to play a national concert in Cuba as he thought the band’s long hair and their ‘high tender voices’ might insert some much-needed androgyny into the island’s culture,” Tietchen says. “When Castro finally had enough, he had Ginsberg seized and placed on the next plane out of Cuba.”

When the Styrons arrived in 2000, their entourage included Garcia Marquez and playwright Arthur Miller, who would describe their time with Castro in a long essay published in The Nation. Miller, who died in 2005, wrote that he had anticipated a stale affair in the spirit of his encounters with Eastern European leaders.

“I expected to have to do a lot of agreeable nodding in silence to statements manifestly silly if not at times idiotic,” he explained in his essay. “Unelected leaders and their outriders are unusually sensitive to contradiction, and the experience of their company can be miserably boring.”

Rose Styron noted that she had attempted to visit Cuba before, on behalf of Amnesty International, but the government rejected her application for a visa. When she finally saw Castro, she was surprised by the neatness of his appearance, a well-tailored suit and not the fatigues of his earlier years.

Castro’s guests dined on “fantastic shrimp and spectacular pork, dream pork,” Miller wrote. The meal wasn’t boring, but it was long and exhausting. For hours, Castro expounded about the world, whether the CIA or the intransience of the Russians. He had clearly kept track of his guests’ whereabouts earlier in the day and found time to tease Styron about her visit with a local dissident.

By 2 a.m., Garcia Marquez was apparently sleeping and Castro’s underlings fighting to stay awake. With the leader “in full flight, borne aloft by a kind of manic enthusiasm,” Miller summoned enough courage and energy to tell his host that he had had enough.

“I raised my hand and said, ‘Please, Mr. President, forgive me, but when we arrived you will recall that you said I was 11 years, five months and 14 days older than you,'” Miller wrote. “I paused, struck by his sudden brow-lifted look of surprise or even some small apprehension at the interruption. ‘It is now 15 days.'”

Castro laughed and sent everyone home.

Recalls Styron: “His cabinet did everything but stand up and cheer.”