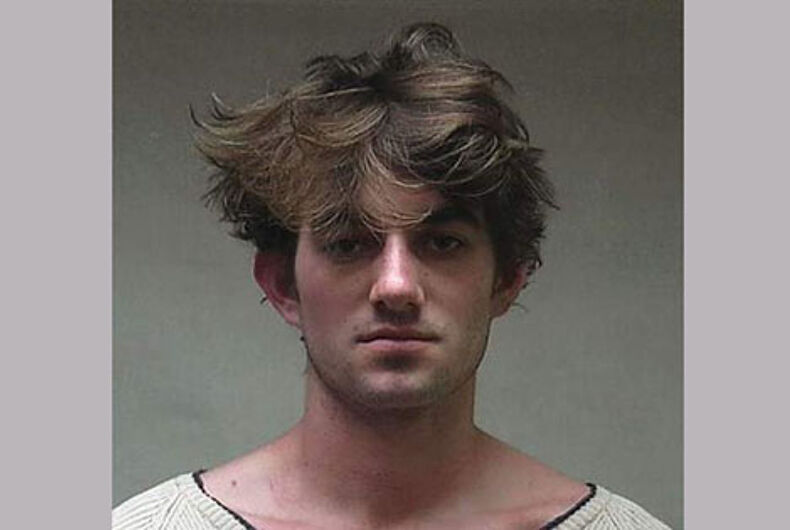 Police in Aspen arrested John Conor Kennedy, the son of Robert F. Kennedy, Jr., after a fight outside a nightclub early Thursday that his father said was the result of bullying.

Kennedy, Jr., told the Aspen Times that his son — who goes by his middle name, Conor, and made headlines as Taylor Swift’s boyfriend four years ago — was inside the Bootsy Bellows nightclub with a gay friend, when he asked a group of four men to apologize for calling his friend a “fag.”  This was an hour before the fight erupted at about 1:40 a.m.

According to RFK, Jr., one of the men did come over and apologize to the friend. But an hour later, as the men were leaving, at least two of them again yelled antigay slurs at Conor’s friend, and Conor told them to stop, Kennedy, Jr., said.

One of the men responded by asking him what he was going to do about it, and Kennedy, Jr., said that man took a swing at Conor. Police say that’s when they received calls to assist the nightclub in ejecting patrons who wouldn’t leave. The newspaper said no one took swings at Conor’s friend nor was he involved in the fight, which reportedly continued on the street outside Bootsy Bellows.

“Like any father, I don’t want to see my son fighting or involved with the police,” Kennedy, Jr. told People magazine. “But on the other hand, I’m proud that he stands up to bullies.”

Police Officer Andy Atkinson wrote in his report that when he arrived at the club, he saw a fight break out between two men, according to the Aspen Times.

According to Atkinson, Conor grabbed another man by his shirt, pulled him down so he was bent over and hit him four or five times in the back of the head with his fists. Officers attempted to break up the fight but the Harvard rugby player — listed in the affidavit as 6-foot-3-inches and 200 pounds — wasn’t finished trying to punch the man. Atkinson reported that he tried to restrain Conor, but required help.

“Kennedy and I fell back onto the snow bank on the south side of (Hyman Avenue) where Kennedy attempted to pull away from me and stand up,” Atkinson wrote. “I held onto Kennedy’s arms and rolled him over with assistance from a bystander on to his stomach.”

The unidentified bystander also helped Atkinson handcuff Conor, according to the report; the grandson of RFK apologized to Atkinson after he was arrested, the report states.

“Kennedy then said, ‘He called my friend the F-word.”

Conor was charged with disorderly conduct/fighting, a municipal offense treated as a misdemeanor.

Kennedy Attorney Matt Ferguson released a statement Thursday saying “multiple witnesses to the incident have reported that two men assaulted Conor Kennedy after he rebuked them for directing a homophobic slur and threats to his close friend.”

Robert F. Kennedy said he regretted Aspen police having to get involved in the incident because of the way officers treated the Kennedy family when his brother, Michael Kennedy, died Dec. 31, 1997, on Aspen Mountain after skiing into a tree.

“The Aspen Police have been extraordinary to my family,” he said. “When my brother was killed, they were on the scene and treated us with incredible kindness my family will never forget.”

Conor Kennedy’s court date is set for Feb. 22. He has not entered a plea.

Last day to vote: Who should be the LGBTQ Nation Person of the Year?