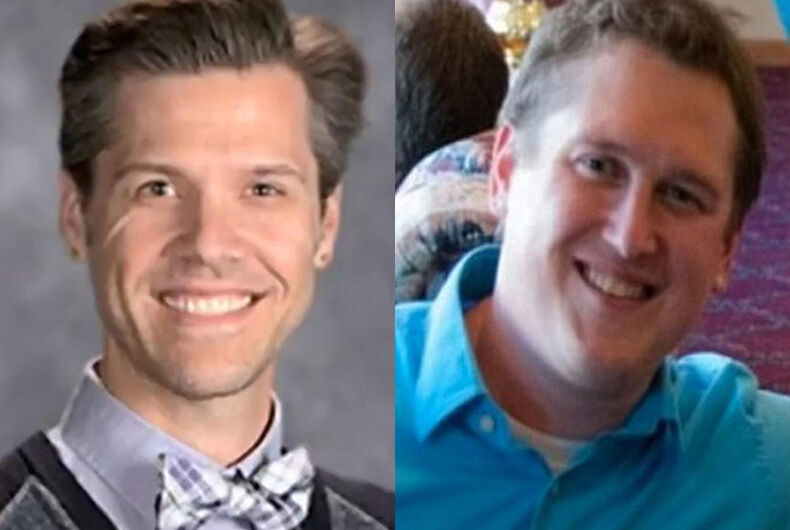 SOUTH ST. PAUL, Minn. (AP) — A Minnesota elementary school teacher and his husband had sexual conduct with eight underage boys, according to a police report following a four-month investigation.

South St. Paul police closed the investigation into teacher Aric Babbitt and his husband, Matthew Deyo, and released the documents this week. The couple was found dead Aug. 25 in an apparent murder-suicide on Lopez Island in Washington state.

Neither was charged in relation to the abuse allegations.

The deaths came shortly after a 16-year-old boy and his parents went to South St. Paul police to report an ongoing sexual relationship between the teen and the men.

The 134-page investigative file obtained by the St. Paul Pioneer Press shows the case went beyond the 16-year-old’s allegations. According to the documents, seven other boys came forward after the teen’s allegations became public and police confiscated photos and videos from the couple’s phones, computer and other media devices.

The case file says the alleged abuse took place at the home of the married couple, at Babbitt’s family cabin in Crow Wing County, at Minneapolis hotels and at Deyo’s parents’ farm near Hastings.

Police said that in many instances, Babbitt, 40, and Deyo, 36, gave their alleged victims alcohol and marijuana and bought them phones or other devices to stay in touch.

The first accuser told police that Babbitt was his former teacher and volunteer work supervisor. The boy said Babbitt was a mentor for him when he came out as gay to his family and that the teacher gave him gifts of underwear and yoga shorts and also asked for photos before he was 16, according to the investigative reports.

“As a school district, we strive to provide a safe and secure learning environment for our students,” South St. Paul schools Superintendent Dave Webb said in an email to the Pioneer Press. “This has been very hard on our entire South St. Paul community.”

Babbitt was a teacher at Lincoln Center Elementary since 2002 and was put on paid leave after the district learned of the allegations Aug. 17.