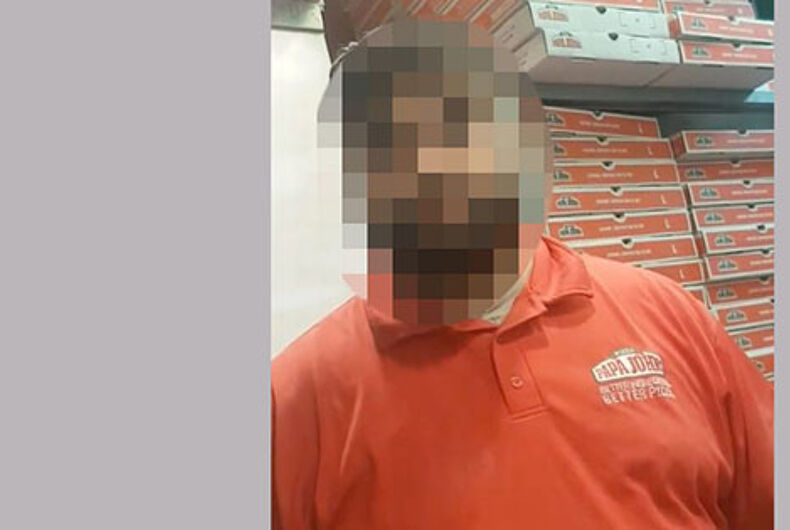 Two friends who hugged each other in a Papa John’s pizza shop in England were shocked to be scolded, harassed, and ultimately chased from the store and beaten on the street by an employee who claimed he owned the franchise.

And it was all caught on video.

Police arrested their attacker and a spokesperson for the chain said he’d been suspended pending its own investigation. The unidentified man is charged with suspicion of actual bodily harm and was released on bail, with a hearing set for February.

In the video provided by the British tabloid, the Mirror, bleeps are heard at the point when the employee called the men slurs, including “gay bastard, and asking one of the men if he wanted to “shove his mouth on [the other man’s] cock.”

The newspaper also bleeped-out the men repeating the words in their confrontation with the employee, who forced them to leave and then challenged them to a fight on the sidewalk outside the shop in Hayes, Middlesex.

It all started Saturday night, around 11:30 p.m., according to one of the men, who spoke to the paper on the condition their names would be kept private.

“My friend told me he had been promoted at work and I gave him a hug when the (worker) said something along the lines of ‘we don’t want none of that behavior in here’ and ‘you’re too close for my liking.'”

“Because I am gay?” one of the men asked, as the worker repeatedly yelled at them, saying, “This is my store, I own it,” and, “Get the hell out of my store”.

The employee threatened the men as they recorded his rants on a cell phone: “I’ll break that phone and I will make you eat it.”

The video shows the two customers being pushed toward the door and pushed out onto the sidewalk, where the angry employee followed them, kicked at them, and then challenged them to a fight.

One of the men is heard to warn him, off camera, that he will lose his job for this, and he responded callously: “I don’t give a shit.”

It’s at this point the employee pointed to one of the men and asked the other, “would you shove his mouth on your cock?” The answer from one of the men is, “Yeah, he would, and what’s that got to do with you?”

That’s when the worker can then be seen lashing out at one of the men, knocking the cell phone to the ground and damaging it.

“It’s ridiculous in 2016 that I can walk into a shop and be subject to abuse and homophobia,” one of the men told the paper. “I respect people and I was disrespected. I don’t care whether it is a franchise. That person should not be working there discriminating against my sexuality.”

A spokesperson for Papa John’s told the Mirror:

“We are disappointed by this incident and have a zero tolerance policy towards any abuse of our customers.

“We will co-operate with the police in their investigation and will consider any appropriate action when this is complete.”

See the entire video below from the Mirror.