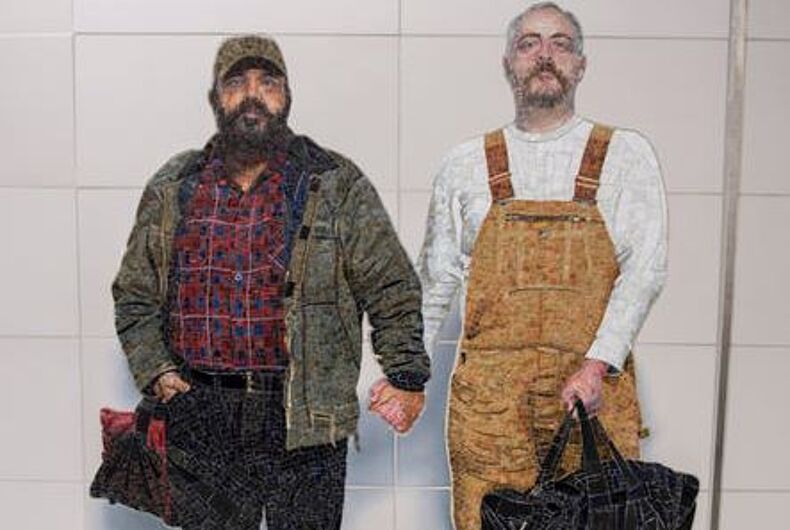 Mural by Vik Muniz on the wall of the Second Avenue subway station at 72nd Street in New York. The subjects are Thor Stockman, left, and his husband, Patrick Kellogg. Photo: New York Metropolitan Transportation Authority via AP

NEW YORK (AP) — The sight of two men holding hands is far from uncommon, but a mural of two men doing just that is showing up in an unusual place — on the walls of a new subway station in New York City.

That depiction of love between gay men is a rarity in public art, experts say.

“It was like winning the lottery,” Thor Stockman, 60, said of finding out that he and his husband of 3 ½ years, Patrick Kellogg, were going to be part of artist Vik Muniz’s “Perfect Strangers,” a series of life-size mosaic portraits of everyday New Yorkers gracing the walls of the new subway station at 72nd Street. But “part of me wishes that it wasn’t a rarity, that it wasn’t remarkable.”

The station on the city’s long-awaited Second Avenue subway line is scheduled to open Jan. 1.

Muniz said it made sense to include the two men in a project intended to show the different people that riders are likely to encounter on their daily commutes.

Jonathan David Katz, an expert in queer art history, said he could find no other example of a permanent, non-political LGBTQ public artwork in New York City. He mentioned George Segal’s “Gay Liberation Monument” near Stonewall Inn, the site of the 1969 riots that launched the gay rights movement. But that work, featuring two men standing and two women sitting, is expressly commemorative of a political moment.

A work like Muniz’s is long overdue in a city “ostensibly the epicenter of both the art world and the gay movement,” said Katz, director of the doctoral program in visual culture studies at SUNY Buffalo and the former executive coordinator of the Larry Kramer Initiative for Lesbian and Gay Studies at Yale University.

“What makes it a turning point is it isn’t gayness singled out and made the theme. On the contrary, the work naturalizes gayness within the fabric of the city, and in so doing, that’s actually an even more powerful message,” he said.

Nicholas Baume, public art fund director and chief curator, agreed. “The work reminds me that it’s a common occurrence to see a gay couple holding hands waiting on a subway platform in New York City. It’s great that it’s no longer a taboo for men to show this kind of everyday affection.”

Stockman and Kellogg said they took the photo that is the basis for the mosaic by chance more than three years ago; they had gone to Brooklyn to meet up with a friend who was working on the project, and a photographer asked if they wanted to be photographed. Stockman assumed plenty of people were being photographed, and “we were hoping maybe we’ll get a nice portrait print out of this by standing there for five minutes.”

It wasn’t until earlier this year that they were told their image would be among those going up in the new station, and they were asked to keep it under wraps as the specifics of the art installations hadn’t gone public yet.

When they were finally able to tell their friends, the reaction was joyous, said Kellogg, 47, and not only for the two of them but because it was the kind of image of a gay couple that’s not often seen in pop culture.

Muniz’s work at the 72nd Street station is joined by three other artists, one at each of three other stations on the subway line. Every artist who submitted a proposal to be considered for the project came forward with their own idea, not one based on any kind of theme or idea from the Metropolitan Transportation Authority’s Arts and Design public art program, said Sandra Bloodworth, the director.

Finalists then presented their ultimate concepts, and the winning artist was selected. Bloodworth said Muniz’s overall concept was approved, not each individual image.

“That’s the responsibility we had,” she said. “We would create great works that would mean something to people.”

Follow Deepti Hajela at www.twitter.com/dhajela. Her work can be found at http://bigstory.ap.org/content/deepti-hajela.