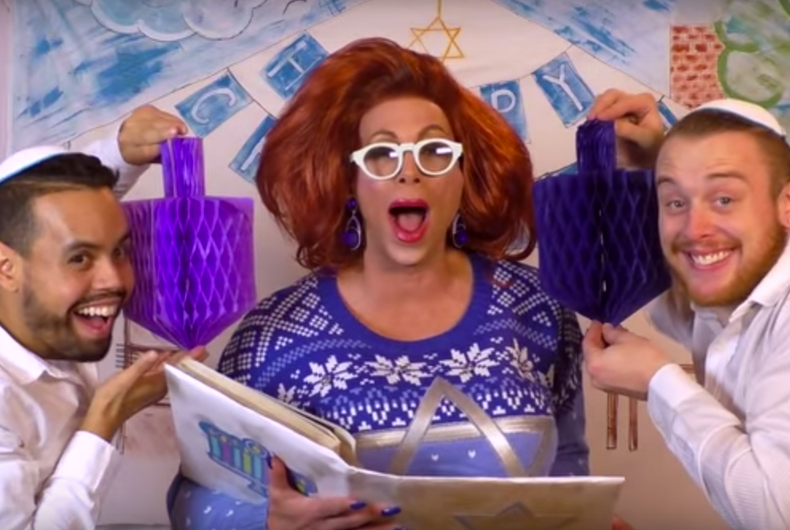 Whether you’re clueless about Hanukkah or bitter that Christmas gets all the fun drag parodies, this one’s for you.

Sherry Vine (aka Keith Levy) tells the story of Hanukkah, which runs from Dec. 24 to Jan. 1 this year, in a parody of Blondie’s “Rapture.” Named simply “Hanukkah,” it’s the first video in Vine’s eight-part “Oy to the World” series on her YouTube channel gaySVTVworld.

“Josh [Rosensweig of gaySVTVworld] and I have been talking about doing a Hanukkah celebration for years,” she told OUT. “Christmas has always been strongly represented in drag, but to my knowledge, no other drag queen has ever done a huge Hanukkah event like this. After putting the week’s ‘Oy To The World’ programming together, I see why. It’s a lot of work! Christmas is just one day. Hanukkah is eight!”

Vine stars as Mama Gottbinder, singing about why Jews light one candle on the menorah for each of the eight days of Hanukkah, while young men in white yarmulkes dance around her.

She even busts out a rap in the middle, talking about keeping kosher and visiting the social hub that is the Jewish deli.

Check out “Hanukkah” below, and visit Sherry Vine’s YouTube channel for more from her “Oy To The World” series.