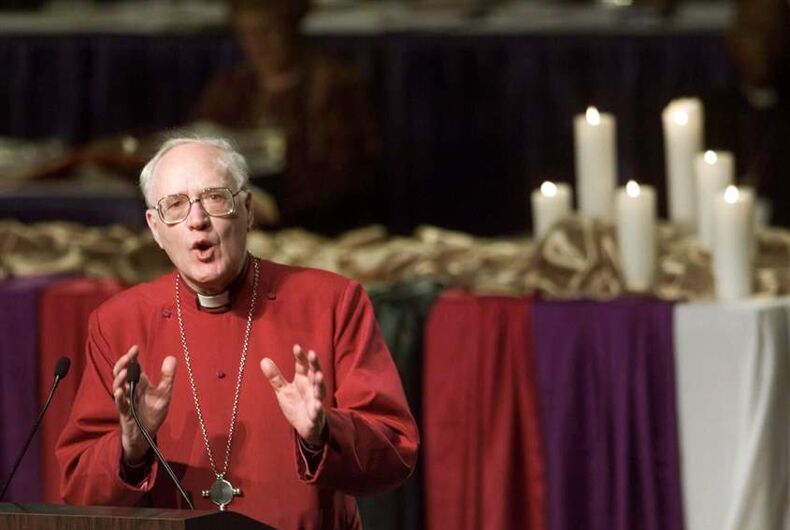 A photo of former Archbishop of Canterbury, Lord Carey of Clifton, has been removed from a “wall of fame” at King’s College London after upset from students over his antigay views.

The move follows a review of the window display at the campus after a group of students, led by KCL student union president Ben Hunt, which took place last year. He said at the time that the university asked him to compile a list of alumni for consideration.

Upset over Lord Carey’s inclusion began in 2012, after he disparaged same-sex relationships.

That same year, he asked then Prime Minister David Cameron to do away with plans to back same-sex marriage, saying it would lead to persecution of those who disagree.

In 2006, Carey said the ordination of Bishop Gene Robinson bordered on heresy because he is openly gay and in a long-term relationship with another man.

The university denies that the move was brought on by concerns from students over his views on homosexuality however.

They said in a statement said Carey’s picture was removed, along with those of Archbishop Desmond Tutu and historian Sir Michael Howard, as it did not “capture the diversity of our university community.”

“It is positive that we now celebrate a more representative sample of the King’s community, past, present and future which can inspire students, and alumni to look beyond the walls of King’s and outside into the world,” Hunt said in a statement.

Naturally, there has been a backlash to the decision to remove Carey’s photo.

Reverend Jules Gomes and lecturer Niall McCrae co-wrote in article published by Times Higher Education, in which they called the move “troubling.” :

“Carey is not homophobic,” they wrote, “but his name has been tarnished by a ‘Gaystapo’ that refuses to acknowledge that a clergyman cares for all, while maintaining a traditional view of marriage.”

Vote now: Who should be LGBTQ Nation’s Person of the Year?