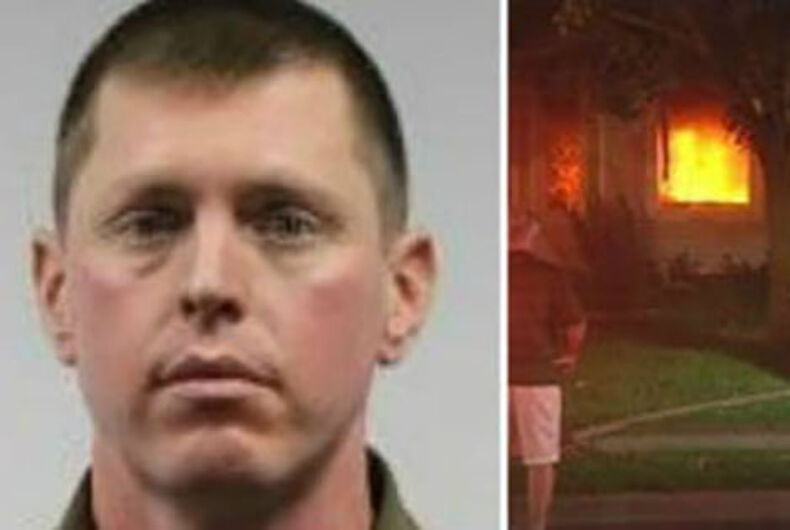 A firefighter in a suburb of Binghamton, N.Y. has pleaded not guilty to charges of arson that his family and pro-police groups blamed on the Black Lives Matter group, according to WBNG-TV.

The home of Jason Stokes had been decorated with a “Blue Lives Matter” flag, in support of law enforcement, and when firefighters responded to the blaze at his Endicott, N.Y. home in August, they found the message, “lie with pigs, fry like bacon,” written on some of its siding.

That was apparently a reference to a chant at a 2015 protest, organized by Black Lives Matter: “pigs in a blanket, fry them like bacon.”

According to Raw Story, pro-police websites blamed the fire at Stokes’ home on “terrorists” associated with the civil rights group. Two of the founders of the BLM civil rights organization are out queer women.

Prosecutors believe the 41-year-old firefighter wrote the message to help cover up his crime.

“That statement to me is absolutely despicable,” said Broome County District Attorney Steve Cornwell, about the words found on the side of the Stokes home. “It fuels a false narrative when it comes to the work that police officers do. ”

Fortunately, no one was hurt in the blaze.

Cornwell added investigators found multiple gas cans placed throughout Stokes home that appeared to be a booby trap for first responders. But they’re not sure why he did all this, setting fire to his own house, scrawling the anti-police message, setting booby traps. “We don’t need to show a motive, we need to show intent,” said Cornwell.

Following a grand jury investigation, Stokes was charged with second-degree arson last Thursday and pleaded not guilty Tuesday. Trial is set for April 2017. He’s being held on $10,000 bail or $20,000 property bond.

Did Time include a secret dig at Donald Trump in Person of the Year cover?

An Oscars first: actress Kelly Mantle can be nominated in two gender categories