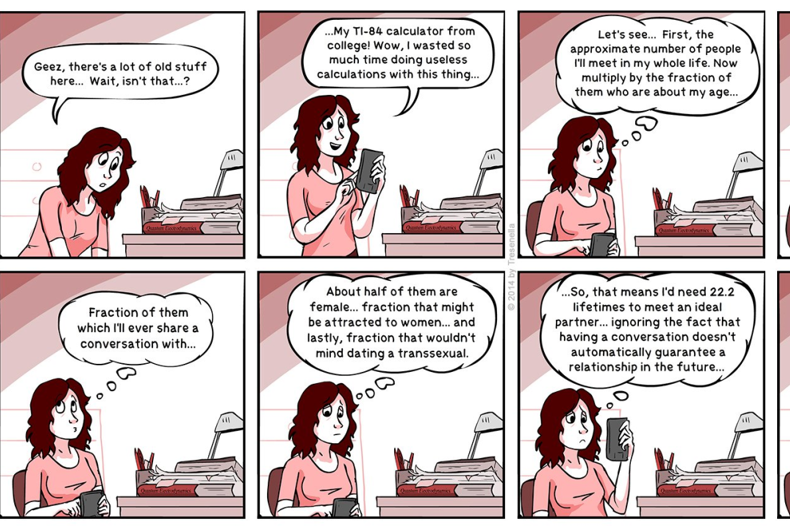 Even before I began transitioning, I was aware of the ongoing debate revolving around when, how, and whether a transgender person should disclose being transgender to potential romantic partners. Like any complex social and ethical issue, there are a lot of aspects to consider.

There isn’t a lot of research on transgender people and dating. The data that exists isn’t particularly encouraging. 47% of LGB people would consider dating a transgender person, and 44% would not. Transgender women are the members of the LGBT community most likely to try dating online, in part because they almost always need to search a larger geographical area than any other segment of the LGBT population to find someone willing to date a transgender woman. This effect is magnified for transgender women in rural areas with a lower population density, where they might have to drive for hours to meet another queer, single person.

For transgender and queer people in the rural areas, online dating applications have become the primary way of meeting other people, and the number of queer spaces and “gay bars” is falling accordingly. Putting that you’re transgender right up front in your profile might cut down on the number of responses, but it also reduces the chances of “jerks and surprises.”

Or at least jerks and surprises on dates. Online is another matter.

When transgender women choose to disclose online, they are often fetishized on dating sites, being treated like, “just an item to check off someone’s sexual bucket list.” “Chasers” present something of a dilemma too: sometimes they represent the only potential attention a transgender woman might receive in a rural area. Transgender men seem to be less subject to prurient interest on gay dating sites, but often feel misunderstood or unwanted. They frequently are subjected to ignorant, insensitive, or hostile comments on sites like Grindr.

Despite the very strong incentive against putting your “transness” out front as part of your profile, an analysis of Match.com surveys revealed that 61% of transgender people tell potential partners they are transgender before they ever go out on a first date.

But what of that remaining 39%?

Like so many other things, the answer to when and if a transgender person discloses their history is “it depends.”

The risk vs. reward calculation for a stealth, post-operative transgender woman in her 50s who has lived as a woman for 35+ years, whom no one in her circle of friends has ever known as anything but a woman, is very low. She is not “cheating someone out of a family”, as a woman of her age isn’t expected to be able to bear children.

Others wait until after a few dates to find out if there is any chemistry before disclosing their history. This is particularly true if they believe that finding such chemistry may make people who weren’t open to the possibility more receptive to the idea, once they realize transgender people aren’t the boogeymen they imagined (Or boogey women. Or boogey persons).

Waiting until intimacy occurs to disclose is at the very high end of the risk spectrum, particularly for pre-operative or non-operative individuals. The potential for violence at this point is exceedingly high. There are numerous incidents of transwomen being murdered by people they were romantically involved with for this reason.

This brings us to the ethics of disclosure, which is an entirely separate question from when to disclose in order to get the best probability at a good outcome in the risk-reward matrix.

Transgender people are treated differently both culturally and legally when it comes to disclosing genetic and sexual history. Right-wing web-sites accuse transgender women who do not disclose their history of rape. Law in the United Kingdom has been interpreted this way, with a 25 year old transgender man in Scotland being sentenced to 8 years in prison for not telling his partner he was transgender before they had sex. There is often a resulting assumption that when transgender women, like Gwen Araujo, are beaten to death by their intimate partners, that this was merely a form of self-defense. This sort of logic is applied to transgender people whether they are pre- or post-operative.

This is regarded differently than any other sort of genetic or sexual history issue where consent and violence is concerned. For example, suppose a woman had a Jewish grandmother. She failed to disclose her ancestry prior to sex, and was beaten to death by her anti-Semitic partner afterwards because he found out. It would be difficult to find a judge or jury willing to consider what she did rape, much less a mitigating circumstance for her murderer. Similarly, failing to disclose that you have black, white, Latino, or any other sort of heritage, does not constitute rape or justification for violence.

There is generally no requirement for an individual to fully disclose sexual history to partners unless there is a known health risk. Nor does an individual have to provide a complete list of whom they have slept with, when, and what acts they have performed. Nor is there a legal requirement to list surgeries you have had. It would be exceptionally hard to convince a jury, much less the police or a prosecutor, that you were raped by fraud because your partner did not disclose that they had breast augmentation, rhinoplasty, or labial reduction.

The simplest explanation for these logical and legal inconsistencies is a toxic mix of homophobia and transphobia. Men are afraid of being labeled gay, or doubting their own masculinity, if they have sex with a transgender person. People in general have a visceral “ick” reaction to a stereotype of transgender people, whether or not they were able to tell the person was transgender. This is the definition of bias.

As such, transgender people, and particularly transgender women, are facing an array of difficult double standards. Disclosing you are transgender comes with a steep penalty; very few straight people are willing to date a transgender person, period. The odds aren’t great with dating within the LGB community, but scarcity is its own problem. Many transgender people live isolated from community by the vast distances of middle-America.

Ethically, transgender people should not be expected to disclose intimate details of their lives and histories earlier than any other group, particularly when it doesn’t actively harm others. Treating an already marginalized population as a special case further adds to the perception of transgender people being part of an “untouchables” caste. Indeed, the acceptance of the violence visited on transgender women based on non-disclosure has a chilling parallel in “honor killings” of women.

Thus, the real question being asked isn’t whether transgender people are ethically obligated to tell partners. It is about double standards, and about why people who find transgender individuals threatening to their self-image seek justification for violence.

Does ‘Rogue One’ include Star Wars’ first gay couple or is it all hype?