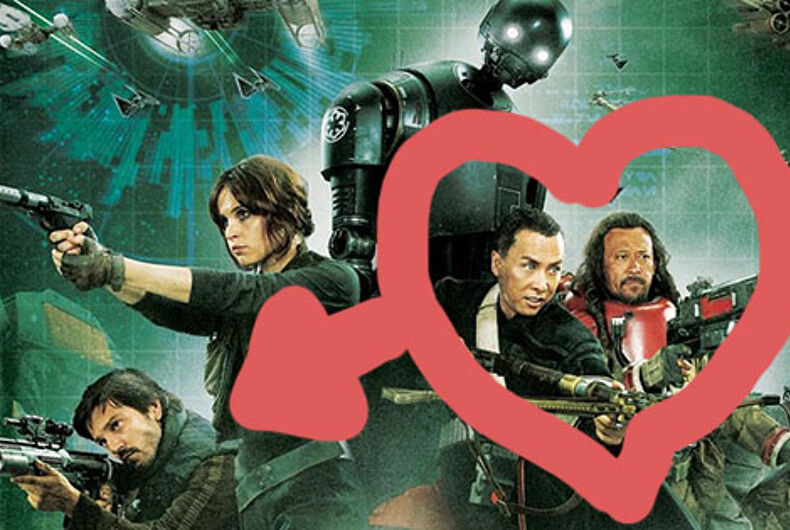 Rogue One A Star Wars Story has proved to be a huge hit at the box office, earning more than $290 million worldwide in its opening weekend. What is not proven, however, is whether Chirrut Îmwe, played by Donnie Yen and Baze Malbus, played by Jiang Wen, are a gay couple.

Some who’ve seen it have already made up their minds. Those tender, funny, and heartbreaking moments between the two rebel warriors are clearly evidence of a gay romance, in their eyes.

“I don’t mind people reading into it,” he told Yahoo Movies, “I think that’s all good. Who knows? You’d have to speak to them”.

Of course, not everyone is seeing it, or buying it.

just keep raising that gay level by like .5 on every new star wars movie and in a couple years we will have trans wookiees

And as should be expected in this post-truth society, this is all the fault of the news media.

And despite the fact Star Trek Beyond portrayed Lieutenant Sulu as gay for the first time, there are even people who don’t believe Asian film characters can be gay. Wait, what? Is this a “Which Is Better, Trek vs. Wars” debate?

No Asian character in the Star Wars movies has ever been written as gay, not ever, not once, but we're already arguing why they "can't" be?

Finally, a little dose of reality:

Was SNL’s gay robot skit offensive or a sly take on stereotypes?

What are the ethics of transgender dating?