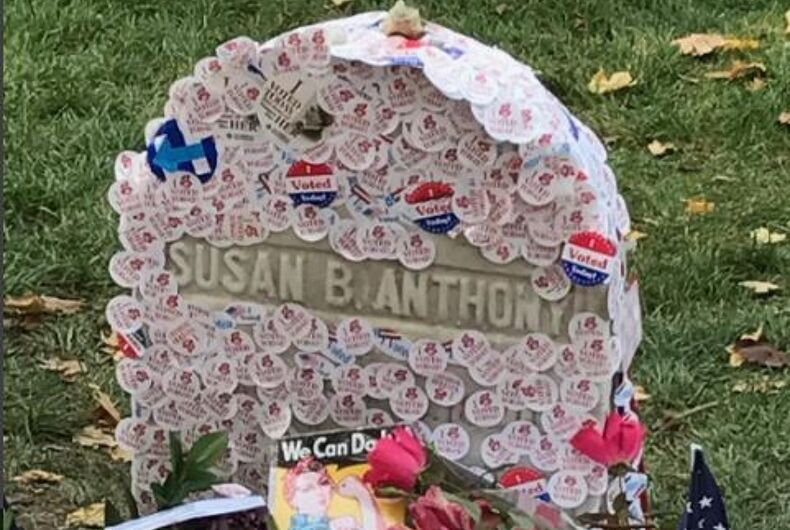 Women are celebrating this historic Election Day, which could result in the first female president, Hillary Clinton, by placing their “I Voted” stickers on Susan B. Anthony’s headstone at Mount Hope Cemetery in Rochester, New York.

People from across the country have come to take part in a tradition that is especially relevant on this election, as Anthony fought for women’s suffrage, resulting in the 19th Amendment to the U.S. Constitution in 1920, giving women the right to vote. Many wore white, as the suffragettes did and as Clinton has often done at key points in this campaign, reports The Washington Post.

This is the scene at @mounthopecemetery this morning at Susan B. Anthony's gravestone. Visitors from all over the country have visited the gravestone to pay their respects to Susan B. Her gravestone is covered with I Voted stickers, flowers and other mementos. A powerful site to see on Election Day. 🇺🇸 #explorerochester #SusanBAnthony #ThankYouSusanB

“I’m voting for the first woman president. As a woman I can vote because of the sacrifices she made,” Jillian Paris told the Democrat and Chronicle.

“I am shocked at the number of people who are here today. I never expected this,” said Janice Schwind. “It’s making me all choked up to see all the people.”

The city has extended the hours at the grave until the polls close, knowing it would be an important day and that there would be more people than usual who wanted to make the trip to the site.

“Visiting Susan B. Anthony’s gravesite has become an Election Day rite of passage for many citizens,” Mayor Lovely Warren said in a news release, the D&C reports. “(W)ith this year’s historically significant election, it seems right to extend that opportunity until the polls close.”

The night Bill Clinton won the presidency in 1992, the Castro exploded