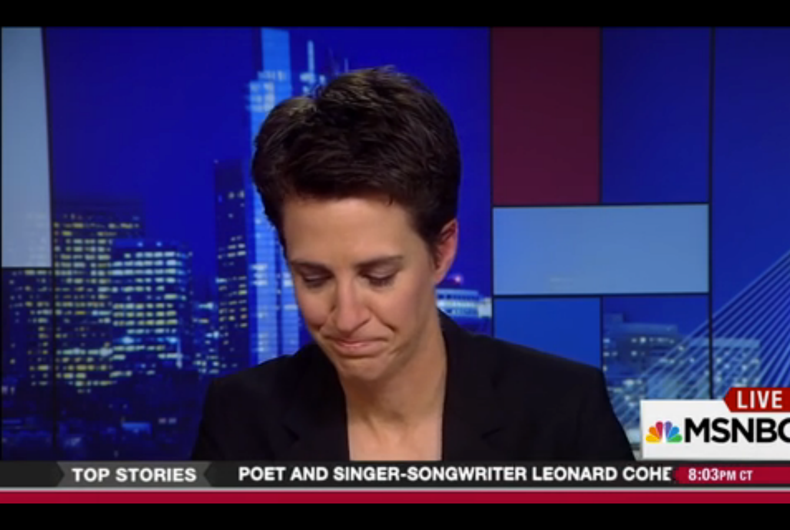 Vice president-elect Mike Pence is one of the most anti-LGBTQ politicians the nation has ever seen. And, many are saying, he may be the most powerful vice president in U.S. history.

On Friday, MSNBC anchor Rachel Maddow got emotional describing how as Indiana governor, Pence essentially criminalized being gay. He didn’t just limit rights for LGBTQ people, Pence forced same-sex couples to face felony charges if they wanted to get married.

Pence made it a felony to “lie” on a marriage license application, and because the forms asked for the name of a husband and a wife, same sex couples couldn’t fill out the form without breaking the law.

“So, ultimately, marriage equality becomes the law of the land everywhere thanks to the Supreme Court, but in Indiana, under Mike Pence, gay couples faced 18 months in prison and $10,000 for applying to get married,” Maddow said, visibly choked up. “Just applying to married put you in jail under Mike Pence.”

Pence has indicated in recent interviews that revoking President Barack Obama’s protections for LGBTQ people — including the directive protecting transgender students — will be a priority of the Trump-Pence administration.

“Washington has no business intruding on the operation of our local schools,” Pence told James Dobson. “It’s just one more example of the heavy hand and liberal agenda of this administration working its way into the purview of the states and the people. Those decisions should be made and can be made at the local level.”

In other words, under Trump, it will be easier for states to pass the kinds of laws Pence has championed, severely restricting the civil rights of LGBTQ Americans.

Maddow went on to describe some of the anti-LGBTQ policies Pence has promoted.

“Mike Pence said you should not only take away money from HIV and AIDS programs, he said AIDS funding should be taken away from serving people with HIV and AIDS,” she said, “because instead it should be diverted into government-funded programs designed to cure people from being gay, to try to fix gay people.”

On Pence’s 2000 campaign website, he advocated for spending public funds promoting the broadly debunked practice of attempting to change a person’s sexually orientation from gay or bisexual to straight.

“Resources should be directed toward those institutions which provide assistance to those seeking to change their sexual behavior,” he wrote at the time.

So, as the LGBTQ community looks to Pence for clues as to what the future might hold, the outlook is grim enough that it brings Maddow nearly to tears.

Meet the gay marine who saved the President’s life

Trump Country: This county voted for Donald Trump and a gay senator