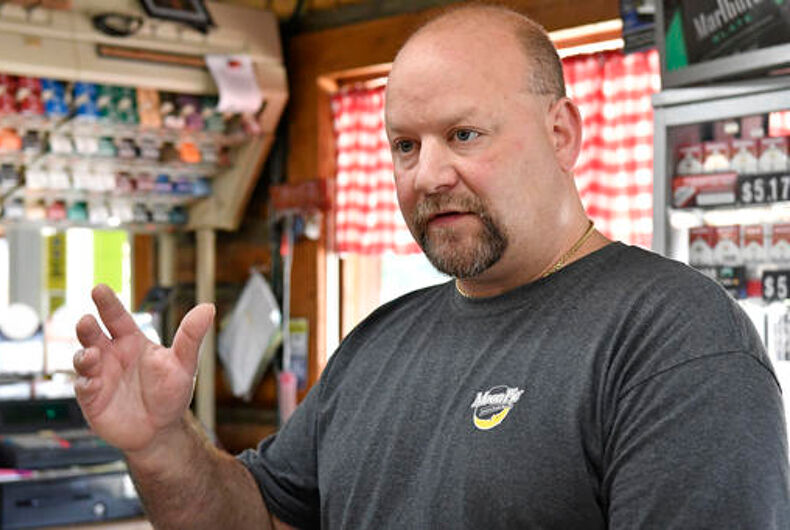 SANDY HOOK, Ky. (AP) — Judy Pennington voted for Barack Obama in 2008, decades after her grandfather dug up and sold coal from his property. Elliott County, Kentucky, had followed the rest of the country into a deep recession, and Pennington “thought somebody young could bring new ideas in for the country.”

On Tuesday, Pennington was one of the voters who helped the county shift from voting for Democrats since its founding in 1869 to choosing Republican Donald Trump in 2016. Seventy percent backed Trump in a county Barack Obama won twice.

In interviews Thursday with The Associated Press, Elliott County residents provided clues to the results that handed Trump the presidency: They felt left behind the nation’s recovery, disappointed in Obama and infuriated by Clinton’s vow to put coal miners “out of business.” They like the way Trump talks and they like what they heard him say: That he’ll create jobs, and correct what they see as the wrongs of NAFTA and corrupt government. The New York City businessman made the sale with these rural voters who still reject congressional and state Republicans when there are other choices.

“If Trump was able to win in Elliott County, that really underscores how his message resonated across the country,” said Senate Majority Leader Mitch McConnell, Kentucky’s longest-serving U.S. senator — who has never been able to win Elliott County in his 31-year Senate career. “He ended up being able to do what most of us thought was impossible, which was to appeal to significant numbers of white working-class voters, many of them, I suppose, never had voted for any Republican before.”

In theory, Pennington and her neighbors could be the best-represented Americans in Washington next year. They are Trump’s base — nearly all-white and working class. Despite vexing McConnell with its “resistance,” the county by definition has as its advocate the most powerful man in the Senate. The House of Representatives and the White House are also Republican.

But what residents of the county’s hollows want from those soon to be in power is rooted in its coal-infused past. The aftermaths of the Civil War and the Great Depression hit hard here, offset by the New Deal’s government-supported projects, organized labor, agriculture and the coal industry — now more a cultural influence than the economic engine it was for generations.

That’s why Clinton’s remark at a town hall event in West Virginia — “We’re going to put a lot of coal miners and coal companies out of business,” stung — even after she apologized, said U.S. Rep. Hal Rogers, a Republican who represents the county.

“The super PACs did an excellent job of playing that quote over and over and over, and that’s all anyone could think about after a while,” said state Rep. Rocky Adkins, a Democrat who represents Elliott in the state House. “That tells people, ‘That person is against me. That person is not for my family.”

Over the last decade while most of the country pulled itself out of the recession, Elliott County did not. AK Steel, one of the largest employers in the region, idled its plant in nearby Ashland. The Big Sandy power plant in Louisa, which once propped up the eastern Kentucky economy with its massive coal purchases, started using natural gas. Now one of the county’s largest employers is a state prison just outside of town, and many of the county’s residents have to travel out of state to find work. Unemployment in Elliott County stands at 11 percent, more than twice the national rate of 4.9 percent, according to the Bureau of Labor Statistics. Median household income is just north of $28,000, a bit more than half of the national median.

More than 85 percent of registered voters in Elliott County are Democrats. Republicans make up 8 percent.

In Tuesday’s election, Elliott went with other parts of the state to elect Trump and send Rogers, who was unopposed, back to Washington. But it’s still a rebel county in some ways. Trump was the only Republican to win a contested race in Elliott County. Jim Gray, a gay, Democratic U.S. Senate candidate, beat Republican Sen. Rand Paul by more than 12 percentage points in the county, while Paul won re-election. And though 17 incumbent Democrats lost their state House seats and handed Republicans control for the first time in 96 years, Elliott County re-elected Adkins with more than 85 percent of the vote.

With Trump, Pennington said she finally found a candidate she believed spoke directly to her.

“He talked and talked like the other candidates would have liked to have said, but they never did. He was just plainspoken,” she said.

For Phillip Justice, Trump fits snugly into his worldview. The 54-year-old retired state worker and small business owner sees injustice everywhere, whether it is who starts for the local high school basketball team or his son’s ability to get a college scholarship.

“I’m tired of putting in my 8, 10 hours a day and being dependable, and you go home and your neighbor has got as much or more that don’t do nothing,” he said. “I look for (Trump) to say, ‘Hey, you people that are on the draw, you are going to go to work and earn your check.'”

Justice is not a Republican voter, although he votes for Republicans.

Eugene Dickerson, an Elliott County native who owns a coal mine in West Virginia, has been voting for Republican candidates since 2000. He said Trump’s surprising surge there could be attributed to the county’s conservative mindset, abetted by its abundance of churches, that unites people around issues like abortion and gay marriage.

“I think appointment of Supreme Court really was the driving force behind Donald Trump carrying Elliott County,” he said.

Others see Trump as someone who represents their interests.

© 2016, Associated Press, All Rights Reserved.
This material may not be published, broadcast, rewritten, or redistributed.
News (USA)
Donald Trump, Kentucky