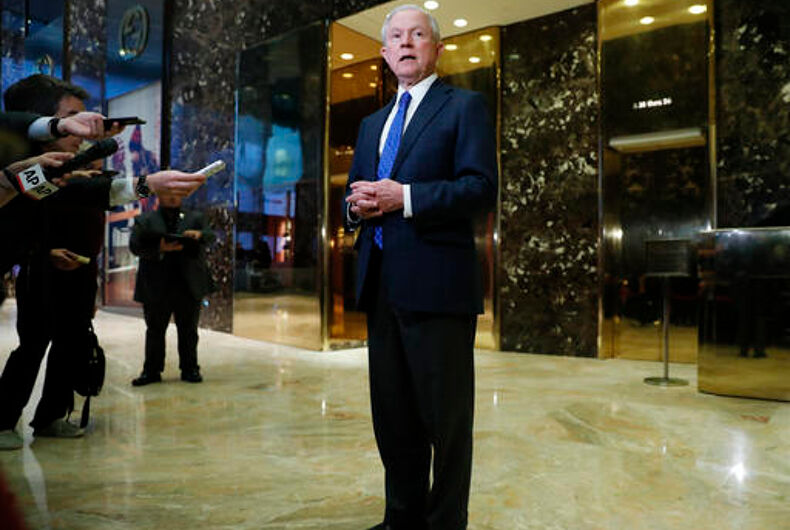 WASHINGTON (AP) — The Senate confirmation hearing of Sen. Jeff Sessions, President-elect Donald Trump’s pick for attorney general, is likely to rehash racially charged allegations that derailed his efforts to become a federal judge and made him a symbol of black-voter intimidation under the Reagan administration.

The expected focus on Sessions’ record on race, policing and immigration comes as the Justice Department’s Civil Rights Division has surged in prominence under the Obama administration. If confirmed, Sessions would have broad latitude to define how federal prosecutors across the country wield their powers and make changes to the Justice Department’s priorities.

Lawmakers and advocates expressed concern Friday that Sessions could sideline or undo the Obama administration’s civil rights efforts, which have included investigations of police departments for unconstitutional practices and lawsuits meant to protect the rights of transgender individuals and black voters.

“Given some of his past statements and his staunch opposition to immigration reform, I am very concerned about what he would do with the Civil Rights Division at the Department of Justice and want to hear what he has to say,” incoming Democratic Minority Leader Sen. Chuck Schumer of New York said in a statement.

Senate Majority Leader Mitch McConnell, a Kentucky Republican, said he strongly supported Sessions, who he said “has worked tirelessly to safeguard the public and to improve the lives of Americans from all walks of life.”

Sessions’ peers on the Senate Judiciary Committee will almost certainly delve into the Alabama senator’s past statements on race. The panel’s top Democrat, Sen. Patrick Leahy of Vermont, hinted as much on Friday, saying the “American people deserve to learn about Senator Sessions’ record.”

Leahy voted against Sessions for a district judgeship when he last came before the Judiciary Committee in 1986.

During that hearing, Sessions was criticized for joking in the presence of a Civil Rights Division attorney that the Ku Klux Klan was “OK” until he learned they smoked marijuana. He was also said to have called a black assistant U.S. attorney “boy” and the NAACP “un-American” and “communist-inspired.”

“I filed all these things away thinking, ‘God, what a racist this guy is,'” Hebert said.

Sessions, a former prosecutor, has said the racially charged allegations against him have been painful to him and an unfair stain on his reputation. He called the matter “heartbreaking” in a 2009 CNN interview and described the allegations as “false charges.”

In defending his record, Sessions is likely to point to his vote to confirm Eric Holder as the country’s first black attorney general and to his co-sponsorship of the Fair Sentencing Act, which sought to reduce racial disparities in how black and white drug offenders are treated.

When he was U.S. attorney in Alabama, his office investigated the 1981 murder of Michael Donald, a black man who was kidnapped, beaten and killed by two Klansmen who hanged his body in a tree. The two men were later arrested and convicted.

“He couldn’t have been more supportive of making sure we got convicted the murderers of the last black man who was lynched by the Klan,” said former Justice Department attorney Barry Kowalski, who worked with Sessions.

But “those incidents don’t obliterate the well-established record of hostility to civil rights enforcement in other areas,” said Wade Henderson, the president of the Leadership Conference on Civil and Human Rights.

Sessions’ civil rights record matters because, if confirmed, he would have oversight of a division that Holder has described as the Justice Department’s “crown jewel.”

Sessions himself has said a “properly exercised” Civil Rights Division “provides tremendous benefit to American citizens” but should not be used as “a sword to assert inappropriate claims that have the effect of promoting political agendas.”

As attorney general, he’d have the power to depart significantly from the priorities of his Democratic-nominated predecessors.

The Obama administration Justice Department, for instance, has opened 23 investigations of law enforcement agencies, including police departments in Baltimore, Chicago and Ferguson, Missouri, for unconstitutional practices and has reached court-enforceable consent decrees with many of them. It sued North Carolina over a bathroom bill it said discriminated against transgender individuals, and has challenged state voting laws that it said disenfranchised minority voters.

As a supporter of Trump, who campaigned on law and order, Sessions is likely to pursue fewer civil rights investigations of troubled police departments. He may also elevate voter fraud as a priority, something the current Justice Department leaders see as negligible.

In the mid-1980s, Sessions was criticized over the prosecution of three civil rights activists on charges of vote tampering in Perry County, Alabama. The activists, who included Albert Turner, a former adviser to Martin Luther King Jr., were acquitted.

During his confirmation hearing Sessions defended the case, citing evidence of absentee-ballot tampering. Democrats and civil rights groups called it an example of the Reagan administration intimidating black voters.

As a senator, Sessions criticized the Justice Department in 2009 for dismissing three defendants from a voting rights lawsuit against the New Black Panther Party after allegations of voter intimidation outside a Philadelphia polling place. The department’s Office of Professional Responsibility found no evidence politics played a role in that decision.

Policy differences aside, the Civil Rights Division is expected to continue enforcing civil rights laws, such as prosecuting police officers for egregious acts of violence.

“The challenge for an incoming administration is always to make those policy changes without making law enforcement look like a purely political undertaking,” said William Yeomans, who worked in the division for more than two decades. Otherwise, “it hurts the legitimacy of the institution.”

Fifth Harmony’s Lauren Jauregui: ‘I am a bisexual Cuban-American woman’

‘Help us not get erased:’ A message on Transgender Day of Remembrance