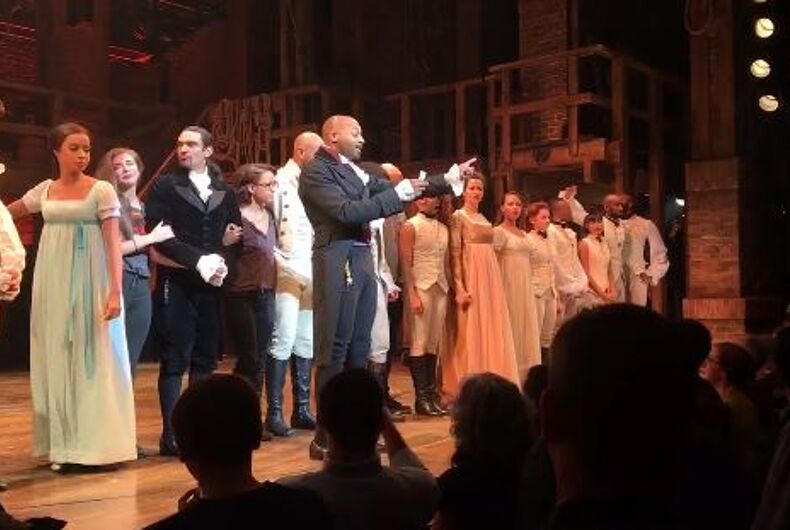 Vice president-elect was greeted with a mix of cheers and boos when he entered the Richard Rodgers Theatre in New York City to watch a performance of Broadway smash hit “Hamilton,” and was addressed from stage by the cast with a message of anxiety and hope over what a Trump, Pence administration might mean for society’s most vulnerable.

While Donald Trump had a meltdown on Twitter over the incident, demanding Pence be given a safe space and calling on the cast to apologize, Pence himself seems less fragile than his boss.

Pence appeared on “Fox News Sunday” and told host Chris Wallace that he “really enjoyed the show” and was not offended by the cast’s comments to him at the end of it.

“I nudged my kids and reminded them that’s what freedom sounds like,” he said.

“I did hear what was said from the stage, and I can tell you, I wasn’t offended by what was said,” he added. “I’ll leave to others whether that was the appropriate venue to say it.”

He also addressed those worries about whether or not Trump, who has proved divisive and who stoked fears throughout his campaign along racial and ethnic lines, would truly be a president for all the people.

“I know this is a very disappointing time for people that did not see their candidate win in this national election. I know this is a very anxious time for some people,” Pence said. “And I just want to reassure people that what President-elect Donald Trump said on election night, he absolutely meant from the bottom of his heart. He is preparing to be the president of all of the people of the United States of America.”

The actor who read the address to Pence, Brandon Victor Dixon, appeared on “CBS This Morning” to say that the cast will not be apologizing, because “there’s nothing to apologize for.”

Dixon, who plays Aaron Burr, also shared that “Hamilton” creator Lin-Manuel Miranda had a hand in crafting the remarks, although Dixon “made some adjustments.”

“Art is meant to bring people together,” Dixon said, adding that Trump and Pence are welcome to come backstage to meet with the cast at any time.

Why are transgender Americans so worried about Donald Trump?