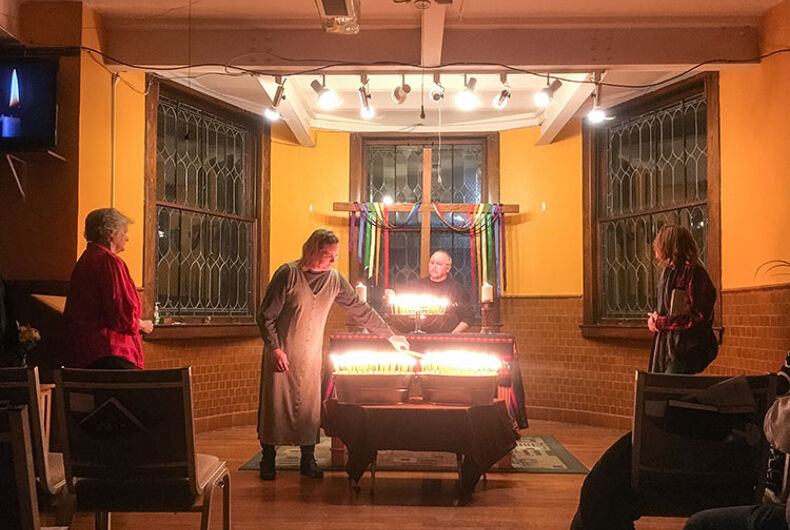 This article has been edited to include the voices of transgender people of color who were notably absent from the original report.

Anxiety is high among many transgender Americans after the sweeping Republican election victory. They fear stronger resistance to their push for civil-rights protections, including broader access to public restrooms, and wonder if their newly won right to serve openly in the military is in jeopardy.

Transgender people “are concerned for their safety, survival and legal rights in the coming years,” said Chase Strangio, an attorney with the American Civil Liberties Union who often works on transgender issues.

Among the specific concerns:

— Many transgender people expect that Republican President-elect Donald Trump’s administration will abandon or weaken the efforts by President Barack Obama’s administration to enable transgender students to use the bathrooms of their choice at public schools. Republican officials in numerous states have opposed that campaign, saying schools should not be required to let such students use bathrooms or locker rooms based on their gender identity.

— There are fears that more GOP-governed states will approve legislation limiting transgender rights and will reject proposals to expand such rights.

— There’s uncertainty about the Pentagon’s recently adopted policy of allowing transgender people to serve openly in the military. Some conservative groups, including the Family Research Council and the Center for Military Readiness, have suggested a reversal of the policy. So has GOP Rep. Duncan Hunter of California, who serves on the House Armed Services Committee.

“The question needs to be asked: Does this make our military more effective and more lethal?” said Hunter’s chief of staff, Joe Kasper. “It’s hard to see how.”

Mara Keisling, executive director of the National Center for Transgender Equality, was cautiously optimistic that the military’s new policy would survive.

“I don’t know if anything will happen, but we’re certainly alert and ready to fight,” she said. “Hopefully, good, smart people will prevail.”

More broadly, transgender-rights advocates have been dealing with an outpouring of dismay and apprehension in their community.

Keisling’s organization, for example, held a call-in session Friday to provide advice to transgender people worried that changing their gender designation on federal and state identity documents might become more difficult in the new political environment.

During the presidential campaign, Trump sent mixed signals about his approach to transgender rights.

At one point, he said transgender celebrity Caitlyn Jenner could use whatever bathroom she preferred in one of his luxury buildings — an offer Jenner later took up at the Trump International Hotel and Tower in Manhattan. However, Trump has declined to repudiate a divisive North Carolina law that restricts transgender people’s bathroom access. He has said such policy decisions should be left up to the states.

Since his election, Trump has not publicly addressed transgender issues, though he did ease some concerns among gays and lesbians by saying that he considered same-sex marriage to be settled law. Transgender-rights activists remain wary, depicting Vice President-elect Mike Pence and some members of Trump’s transition team as hostile to their causes.

Jennifer Finney Boylan, a transgender author who teaches at Barnard College in New York, said in an email that she fears conservatives will now seek to “isolate and marginalize transgender people” and make them feel separated from the broader gay rights movement.

Boylan’s I Am Cait costar Chandi Moore, a trans woman of color, added this comment about Donald Trump:

“We are worried because he has Mike Pence as his VP who is against trans people in every aspect. He has a cabinet of Republicans along with strategically placing people in positions that will help in some ways will make it easier for them to push back some of the progress that we’ve been working so hard to gain. We know that it’s not going to be easy but its the fact that they’ve tossed to much of this negativity out in the atmosphere already. it is crucial that we continue to stay strong through it all.”

Tiq Milan, a trans man of color who is an acclaimed writer, speaker and advocate, offered LGBTQNation his view:

“We’re scared that this administration will not only attempt to roll back the progress we’ve made in terms of policies and protections but they will allow the hateful rhetoric that routinely turns into violence to go unchecked. We’re concerned about social programs and outlets that so many trans people of color depend on (because we’re 8 times more likely to live in poverty due to rampant discrimination and transphobia) being gutted.”

“The fear that I have as a young out transgender individual is that I don’t feel that my rights will be protected or respected by the coming administration, considering the stance that the vice president-elect has taken in his home state regarding gay rights and the LGBT community,” said Van Brown of Auburn, Ala., a disabled veteran and trans woman of color. She sent a message to LGBTQNation via Facebook: “Also, there are already various laws around the country, states banning transgender individuals from using the restroom at the gym that matches the gender with which they identify. I feel that because the transgender community is smaller than the broader gay rights movement that we are in jeopardy of being singled out and targeted.”

Arianna Lint of the Trans Latina Coalition told LGBTNation in an email: “With the upcoming administration, a large sector of the LGBT community, or should I say the gay (white) men, are shitting on their pants. I only have one question for you: Where were you when the transgender community was fighting for equal rights? All too often you asked the transgender community to fight for you, but you, as a community, have left us behind.”
“Trans people of color and Black-identified trans people stand to lose the most from this new administration,” wrote Tanya A. Walker. “I am speaking for the most vulnerable and marginalized citizens in this society. Most of whom are unemployed, or underemployed, homeless, relying hostile shelters, and in danger of experiencing violence and death, on a daily basis.

“I can’t say why AP news did not interview people of color, but I can say that they missed out on many powerful voices,” she added. Moving forward I believe they will get better at listening to our needs in the future.”

In Iran, treatment of transgender people is a double-edged sword