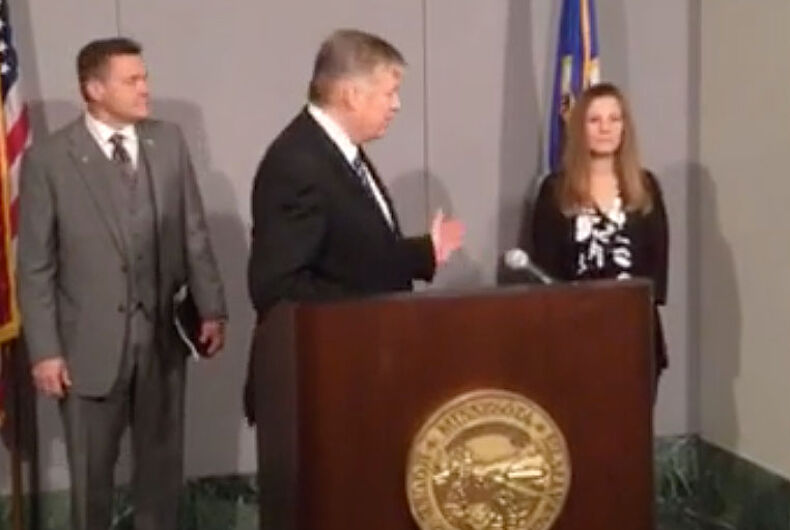 A woman in Minnesota is suing her own child, age 17, for undergoing a gender transition without her consent, according to lawyers who announced the suit at a news conference Wednesday. In every instance, attorneys and the mother herself misgendered her child, who is now living as legally female, referring to her only as her son, as a boy, and using male pronouns.

“It was brought to my knowledge that my son began receiving hormone replacement treatments from Park Nicollet Health Services to transition from male to female, with medical assistance paying for this,” Anmarie Calgaro told reporters in a St. Paul, Minnesota court. “The news that county agencies and health service providers, the school and other county and state offices were completely bypassing me came as a total shock,” said Calgaro, in tears. “Why wasn’t I even notified?”

In addition to attorney Erick Kaardaal, pictured above, Calgaro is working with the anti-transgender Minnesota Child Protection League and the anti-abortion group, the Thomas More Society of Chicago.

David Edwards of Transforming Families, a community-led group that “supports parents of gender-diverse kids” and himself the father of a trans child, was alarmed when O’Hara shared with him how Calgaro, the state representative and her attorney referred to her daughter.

“Purposefully mis-gendering a transgender person is an act of violence,” Edwards said. “To continually do that to your child is not only insensitive but also really harmful.” Edwards added that 38 percent of the trans and gender nonconforming teens who responded to a survey said they had attempted suicide at least once.

Calgaro claims this all started in 2015, when her daughter left her home to live with her father, who is separated from Calgaro. She claims her estranged husband supports her lawsuit and is opposed to their daughter’s transition, but he did attend the news conference.

Phil Duran, the Legal Director at OutFront Minnesota, told NBC OUT he was perplexed at many aspects of the lawsuit.

“At 17 years old, a trans girl is at best going to get access to counseling and hormones,” Duran told O’Hara. “There’s reference in the press release to a surgery or operation. It would be incredibly unlikely—vanishingly unlikely—that a minor would get access to surgery.”

But Calgaro claimed she wasn’t as concerned with her daughter’s transition as much as her own rights, telling reporters at her news conference: “The transitioning thing isn’t even the issue, the issue is that he’s able to make these decisions.”

Calgaro’s aim is for parents to be notified and included in their minor children’s medical decisions, which is not what the law states:

“…any minor who is living separate and apart from parents or legal guardian, whether with or without the consent of a parent or guardian and regardless of the duration of such separate residence, and who is managing personal financial affairs, regardless of the source or extent of the minor’s income, may give effective consent to personal medical, dental, mental and other health services, and the consent of no other person is required.”

OutFront’s Duran tokd NBC OUT that most Minnesota parents have not made independently accessed transition-related care an issue, and drew a sharp distinction between what the law provides and the attorney’s repeated references to emancipation: “making medical decisions on your own is not the same as emancipation.”

“I think mom is grasping at straws,” concluded Duran, “and trying to construe the kid’s decision as a state-imposed violation of her constitutional rights.”

Read more at NBC OUT by clicking here.