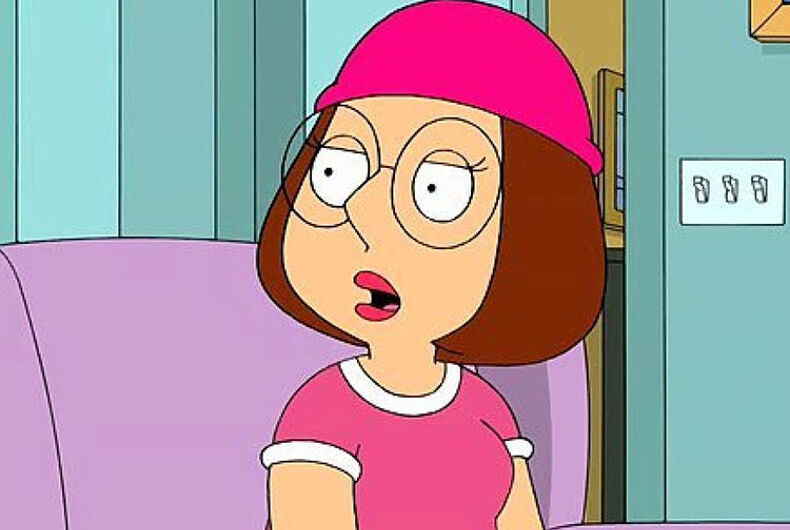 Of all the characters on Fox’s long-running cartoon comedy series, Family Guy, it’s Meg who all too often is the butt of so many jokes without having the benefit of a fully-fleshed out storyline. Showrunner Alec Sulkin suggests that may change in a future episode, with a potential plot that involves Meg revealing she is lesbian.

Although he stressed this was “by no means final,” Sulkin revealed that the Griffin’s oldest child might come out in an interview with the Split Sider website:

“Will you be doing episodes that flesh out other characters, like Meg and Chris?”

“That’s definitely something we’re working on. We certainly try to do episodes with them… Those characters are probably the most one-dimensional on the show. We are working on that, though. There’s one story we have, it’s by no means final, but it would involve Meg coming out as a lesbian.”

“That’s interesting considering her past. In “Brian Swings And Sings,” she pretends to be a lesbian for social acceptance, while in Stewie Griffin: The Untold Story, we learn that in the future, she becomes a transgender man named Ron.”

“Yeah, it would be interesting how we might handle both of those storylines. Sometimes, we do things that go against continuity. We try to explain it, but sometimes, if it doesn’t fit in, we tend to make a joke about it.”

There was an episode early on that was written but never produced, in which Stewie came out as gay, back in 2009. Series creator Seth McFarlane then told Playboy: “We decided it’s better to keep it vague, which makes more sense because he’s a 1-year-old. Ultimately, Stewie will be gay or a very unhappy repressed heterosexual. It also explains why he’s so hellbent on killing [his mother, Lois] and taking over the world: He has a lot of aggression, which comes from confusion and uncertainty about his orientation.”

Read more about Sulkin’s plans for the series at Split Sider by clicking here.