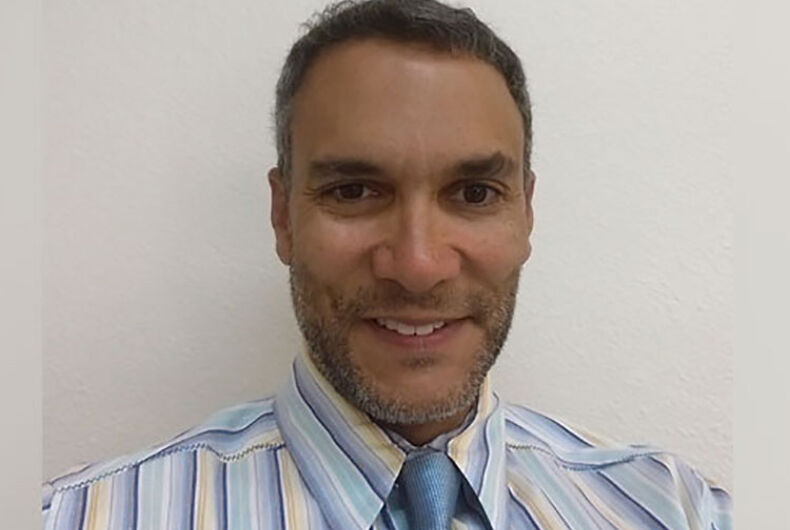 Scott Melton, a beloved English, History and German teacher at Saint Andrew’s private school in Boca Raton, Fla., filed suit Tuesday claiming the administration violated state law by retaliating against him for being a whistleblower. Melton’s lawyer separately alleged discrimination based on his race and sexual orientation.

Melton is out, black and Jewish.

At a faculty meeting in April he declared: “I have to tell you this is the most racist and homophobic place I’ve ever worked.”

The very next day, South Florida Gay News reports that Melton complained to the head of his department that certain administrators were attempting to cover up a possible sex abuse scandal, alleging that outside authorities were not being notified, as required by Florida law. And just one day later the 52-year-old teacher with six years’ experience at Saint Andrews was put on a paid leave of absence.

He never returned, and submitted his resignation two months later:

“Since being put on administrative leave with pay, I have been contacted only once. Saint Andrew’s School has been negligent and derelict in duty to communicate my status for not only this year but also for the 2016-2017 school year… Therefore, due to the hostile work environment and lack of information I have experienced … I am forced to give my resignation … and seek employment elsewhere.”

SFGN reports it obtained an email between the school’s human resources officer and its attorney: “According to the exchange it appears the school debated whether to fire Melton or send him a letter of reprimand admonishing him for his cover up allegations and for accusing an administrator of being homophobic and racist.”

In the email, the school’s lawyer gives her thoughts on the school’s chances of winning a lawsuit if they chose to fire Melton.

“This means it is highly unlikely that the school would get summary judgment on a claim that Scott might assert for either discrimination, retaliation, or whistleblower activities. The case would either have to settle or go trial,” the email reads.

Melton contends that instead of making a decision, the school took no action at all, leaving him hanging.

McDonald’s franchise pays $103,000 to employee fired for being HIV-positive