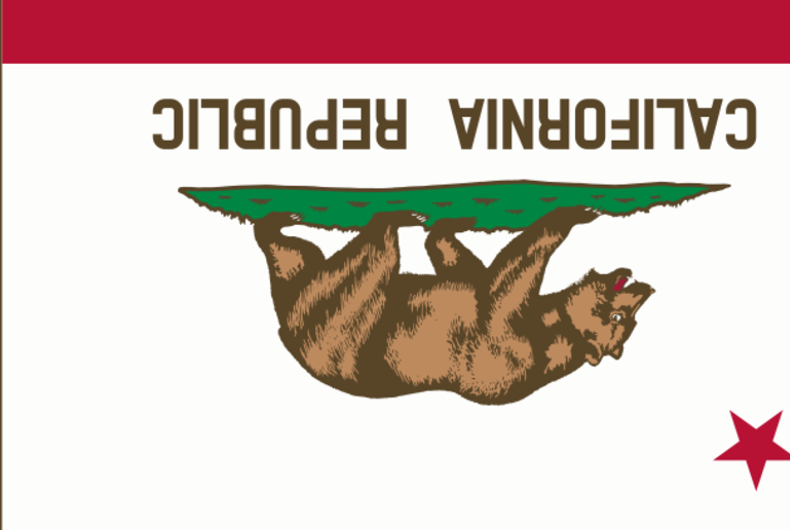 There is a growing movement in California calling for secession now that Donald Trump has become president-elect. Because as we all know, when things don’t go your way the best response is to give up and run away from home.

Apparently helping to gentrify a large swath of California so that only rich people can afford to live there isn’t enough. Now they need to leave the most vulnerable in our society even more high and dry by helping to ensure the United States remains red for the foreseeable future.

Because let’s be honest, that would be the result. And someone should probably tell them that they border the ocean. When they start falling into the water, helped along by the even harder right turn they ensured our country would take, the union might not look so awful after all.

Although they seem to have a plan for that inevitability.

“We can re-enter the union after California becomes a nation,” Pishevar told CNBC. “As the sixth largest economy in the world, the economic engine of the nation and provider of a large percentage of the federal budget, California carries a lot of weight.”

That is, of course, assuming we would take you traitors back.

We have already shown we are emotional animals who aren’t always the most careful thinkers. Do you really think there is no chance of us telling you to take your sixth largest economy and shove it? Don’t be so sure.

Evan Low, a Democrat serving in the California state assembly, has voiced support for the move as well.

In the disastrous case that @realDonaldTrump is elected, I will explore intro of a bill to have CA secede from the union. #kiddingnotkidding pic.twitter.com/gRaIIZiGga

The Yes California movement, calling for the creation of a free, independent California Republic, actually predates the election of Donald Trump, launching in late 2015. It is led by activist Louis Marinelli and is pushing for a 2019 referendum.

Of course, none of this will happen. Unless they are willing to take up arms, which would result in their complete obliteration faster than you can say “Calexit,” the would-be independent state is facing an uphill battle politically.

As the Los Angeles Times reports:

Let’s inject some political reality into the Calexit meme-fest. Amending the Constitution — the minimum step required for a state to secede — is a tough trick. Getting a two-thirds vote in both the House and Senate, as well as ratification by 38 states, will never happen.

Democrats would oppose it. California is so deep blue now that it contributed nearly 3 million votes toward Hillary Clinton’s margin of victory in the popular vote. Our state sends 39 Democrats and only 14 Republicans to Congress, along with two Democratic senators. If we create a new Bear Republic, Democrats will become the permanent minority party in the Remaining States of America. You think our political allies on the East Coast want that?

Even our political adversaries might oppose it. California contributes a lot of money to the national treasury. According to the most recent figures from the California Institute for Federal Policy Research, for every tax dollar Californians pay into the federal budget, we get back 79 cents in spending. I don’t think the red states would let America’s piggy bank waddle away without a fight.

Hard to imagine a bunch of tech geeks taking up arms against the world’s largest, most well-armed superpower.

If Texas didn’t secede under eight years of Obama, then you’re certainly not going anywhere under a President Trump.

I get it, writing President Trump just then was painful. I too fear for what the future holds. I am not particularly put at ease by the Pollyanna types who want us to believe that everything will be okay after all. We are facing serious consequences for this election, but here we are and more than ever we have to come together to fix it. Not pitch a fit, you self-involved, entitled little cartoon characters, you.

Let us know when you are done throwing your little temper tantrum. We will still be here trying to put this divided country back together, and we sure could use the help.