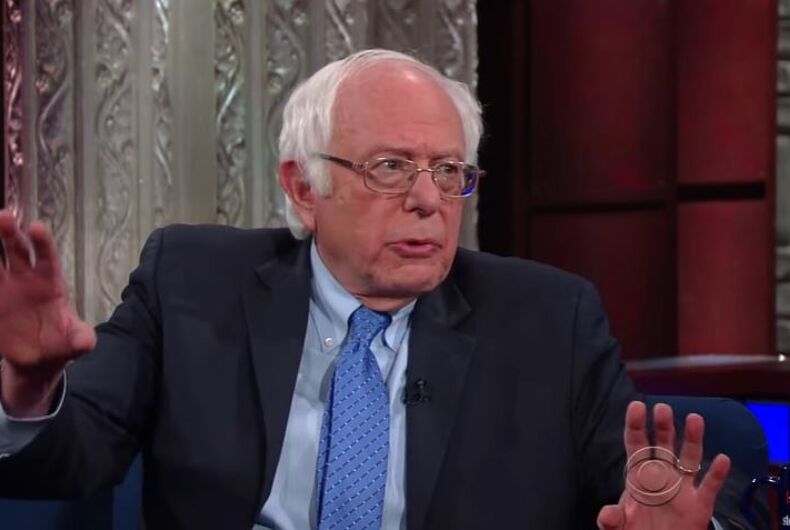 The 2016 election has sent progressives into a collective depression, with many wondering just how bad will life be under a Donald Trump presidency, especially since the Republicans now have control of both the Senate and the House.

Sen. Bernie Sanders, who narrowly lost a tough fought primary campaign against Hillary Clinton, appeared on “The Late Show with Stephen Colbert” to discuss that concern, as well as to lay out the path going forward, because you know Sanders isn’t about to quit.

Sanders bemoaned the state of the Democratic Party, arguing that it must become a grassroots party that once again knows how to speak to the working class in this country, instead of being led by out of touch “liberal elites.”

He points out that Trump managed to win in part by tapping into very real anger and hurt brought about by economic hardships in parts of the country that have been hit particularly hard by globalization, automation and the growing income inequality.

While Sanders doesn’t think Trump is an ideologue, and hopes that means he will be able to be swayed by good ideas, he also worries about what the people around a President Trump might do with all their newfound power.

He worries that they might be saying to themselves, “We have the House, the Senate, we have the White House, we’re gonna have the Supreme Court. We’re going to change the rules of the game so that we don’t lose anymore.”

Sanders fears that campaign finance laws, which have already become lax, will disappear completely. That, combined with voter suppression, could make a Republican controlled federal government a reality indefinitely.

But he has a call to action to go with that warning:

Our job is to bring tens of millions of people together to say: number one, this is not an oligarchy, it is a democracy, number two, you’re not going to split us up by attacking our Muslims friends, or our gay friends, or women, or anybody else. We’re going to stand together and fight for a government and an economy that works for all of us.

Watch Sanders make the case for continuing forward in the videos below.