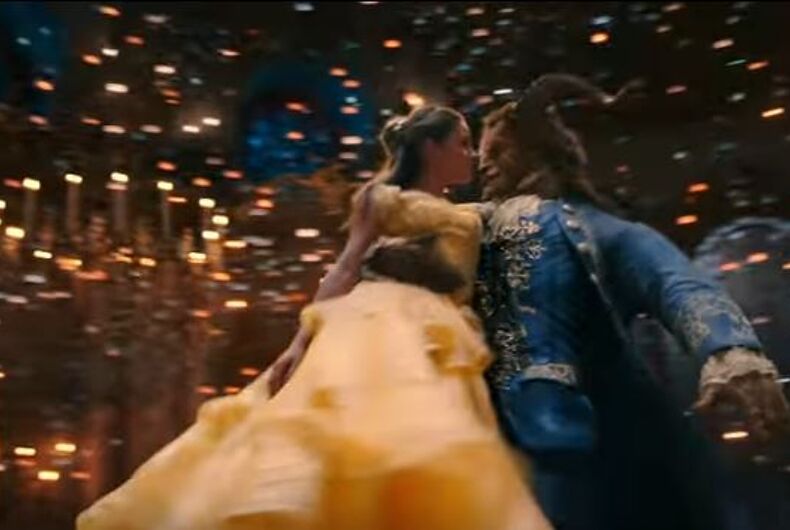 The country, and indeed the entire world, seems as upside down as an “LGBTs for Trump” pride flag. What the world needs now, in addition to unity and a willingness to continue fighting for our rights, is the sweet temporary relief of escapism.

To aid in that quest, may Disney present to you the first full-length trailer for the live-action “Beauty and the Beast” starring Emma Watson as Belle and Dan Stevens as the Beast. The cast is rounded out with Josh Gad as LeFou, and Luke Evans as Gaston.

The 1991 animated classic is beloved, so the stakes are high to get it right. It was the first animated film to be nominated for a Best Picture Oscar. It was also the first Disney animated movie to be adapted into a Broadway musical.

Disney has so far gotten it right at the box office, and for the most part with critics, with their previous live-action adaptations, such as “Alice in Wonderland,” “Cinderella,” and “Jungle Book.”

“Beauty and the Beast” will hit theaters on March 17, 2017. More live-action remakes to be released in the coming years include “Milan,” “The Little Mermaid,” and “Snow White and the Seven Dwarfs.”

Watch the trailer for “Beauty and the Beast” below.

Watson, Stevens, Gad, Evans, and director Bill Condon held a Facebook live Q&A on Monday, where things took a slight political turn at one point, as Stevens suggested the Beast reminds one of Trump.

Watch the humorous moment below.

Emma Watson's reaction when Dan Stevens' description of the Beast sounds a little like Trump… pic.twitter.com/HDpghkDuQ3