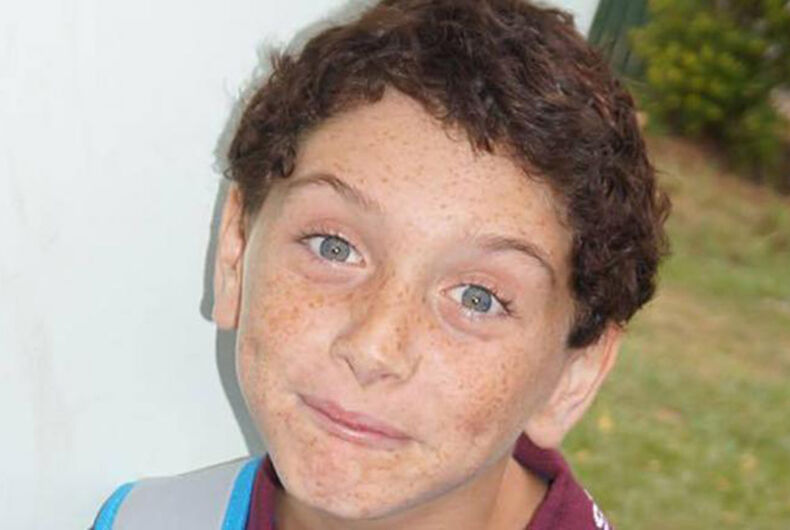 An Australian teenager who was the victim of years of homophobic bullying has taken his own life.

Tyrone Unsworth, 13, from Brisbane, suffered both verbal and physical abuse for two years before his death last week.

Tyrone’s mother, Amanda Unsworth, told The Courier Mail, that the bullying was because of her son’s sexual orientation.

“He was a really feminine male, he loved fashion, he loved make-up and the boys always picked on him, calling him gay-boy, f*ggot, fairy; it was a constant thing from Year 5,” she said.

She added that he had recently been hit in the jaw by a classmate with a fence post, causing him to be hospitalized. She said that he did not want to return to school once he had recovered from surgery.

Queensland Police confirmed that there was an ongoing investigation into the alleged assault, the Daily Mail reports.

“Let me be very clear: no allegation of bullying against this young person was made to our school,” she said in a statement. “Neither the student nor his family ever came to us to say there was a problem of any kind. If they did, we absolutely would have stepped in.”

Miller said the school was aware of the attack with the fence post, however, which happened outside of school hours and had been reported to police.

“The safety and well-being of everyone in our school is our highest priority and we do not tolerate bullying in any way, shape or form,” she said.

“I know you’re pain-free now son and they can’t pick on you anymore, but this shouldn’t have had to happen,” Unsworth wrote on Facebook.

Prominent members of the LGBTQ community in Australia have taken to Twitter to offer their condolences.

Another queer youth in Australia took their life after years of bullying. Tell me again how our fight for equality impedes on your rights?

Our government wants to cut funding to the program that helps to prevent this from happening. This is why Safe Schools is critical.

“Tyrone’s experience isn’t an isolated incident,” Micah Scott, CEO of leading Australian LGBTQ youth group Minus18 told BuzzFeed. “It is shared by LGBTI young people around Australia. I think that is really important to highlight.”

Since February, there has been a campaign against the Safe Schools Coalition, an anti-bullying program meant to help protect LGBTQ youth.

Scott said that Minus18 has seen an increase in youth needing help since the start of the campaign against the Safe Schools Coalition.