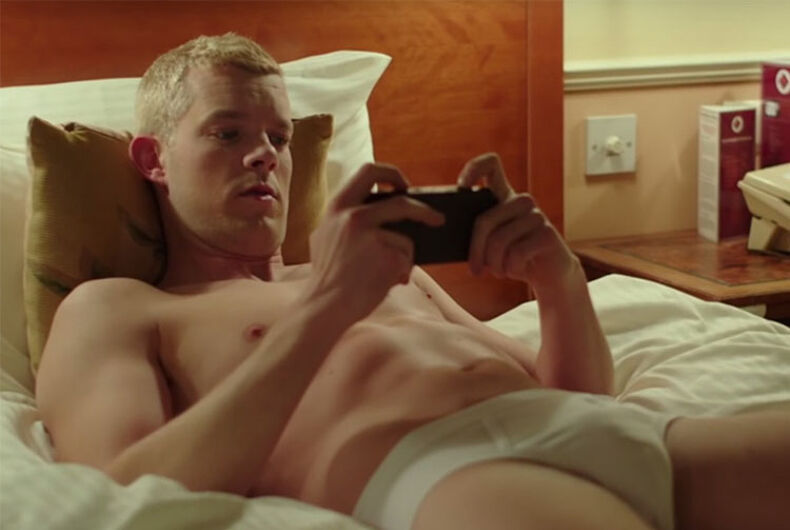 Russell Tovey says he is nothing like his character, self-loathing closeted soccer star Jason, in “The Pass,” a film that won raves at the Flare London LGBT Film Festival in March, and is about to hit theaters around the world.

“I was never tortured about being gay in the way that Jason is,” the British actor told Gay Star News. Tovey said he’s known he was gay since he was 14.

“I was watching the film “Beautiful Thing” on TV. My mum came in and I turned it off and when she went to bed I turned it back on. I remember thinking ‘OK, that’s it.'”

“It’s like someone had put their hand on mine and said, ‘there you go.’ It’s a love story with a happy ending. It’s good to have role models and now there are many more.”

And Tovey said he’s not at all unhappy being out. “Honestly, it’s the best thing that ever happened to me, being gay,” Tovey told GSN. “It’s made my career.”

The film is based on a play that Tovey originated on the stage. It opens in a Romanian hotel room where Jason and his soccer rival, played by Arinze Kene, spar, tease and flirt the night before a big match. Most notably it features Tovey, well known as “Kevin” in Looking, and other roles, and his costar dressed only in their tight, white underpants. Watch a clip below that shows how that night changes them and becomes a touchstone of their lives going forward, each in different ways.