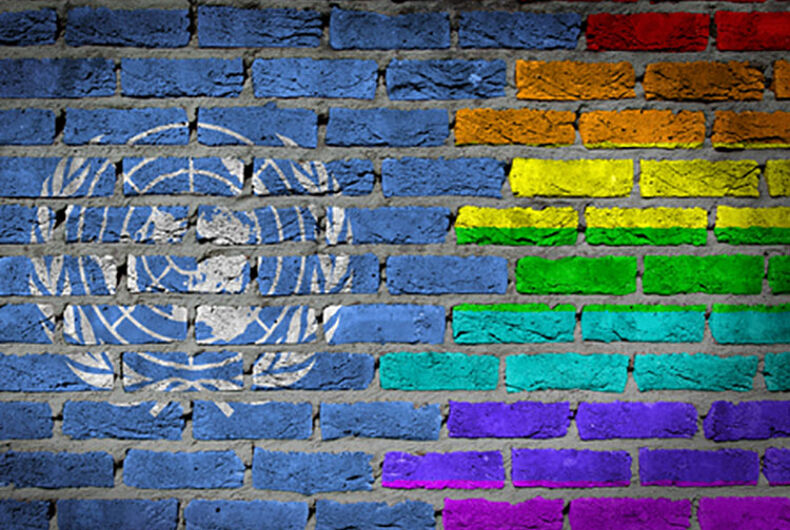 Leaders of African nations and their supporters have failed to suspend the first U.N. independent expert charged with investigating violence and discrimination based on sexual orientation and gender identity around the world.

African nations had urged the General Assembly’s human rights committee to approve a resolution that would initially suspend and then get rid of Thailand’s Vitit Muntarbhorn, who was appointed in September by the U.N. Human Rights Council as the U.N.’s first independent investigator into violence and discrimination based on sexual orientation and gender identity.

As the Guardian reported, Botswana’s ambassador to the UN, Charles Ntwaagae complained African nations “are alarmed” by the Human Rights Council’s attempts to focus on people “on the grounds of their sexual interests and behaviours, while ignoring that intolerance and discrimination regrettably exist in various parts of the world, be it on the basis of colour, race, sex or religion, to mention only a few”.

The council’s focus on sexual orientation and gender identity, according to Ntwaagae, is “to the detriment of issues of paramount importance such as the right to development and the racism agenda.” and that those issues “are not and should not be linked to existing international human rights.”

Those complaints fell on deaf ears. Delegates from Latin American and Caribbean nations, who supported Muntarbhorn’s appointment, introduced an amendment to get rid of the paragraph calling for an unspecified delay in implementing the Human Rights resolution and suspension of his activities.

The rights committee adopted the amendment by a vote of 84-77 with 12 abstentions. The amended resolution was then approved 94-3 with 80 abstentions.

Muntarbhorn is a professor of law who worked on the council’s Commission of Inquiry on Syria and previously served as U.N. special investigator on North Korea and on child prostitution and child pornography.

His job is to look at ways to overcome violence and discrimination against people on the basis of sexual orientation or gender identity, addressing the root causes, and working with states to protect lesbian, gay, bisexual and transgender people.