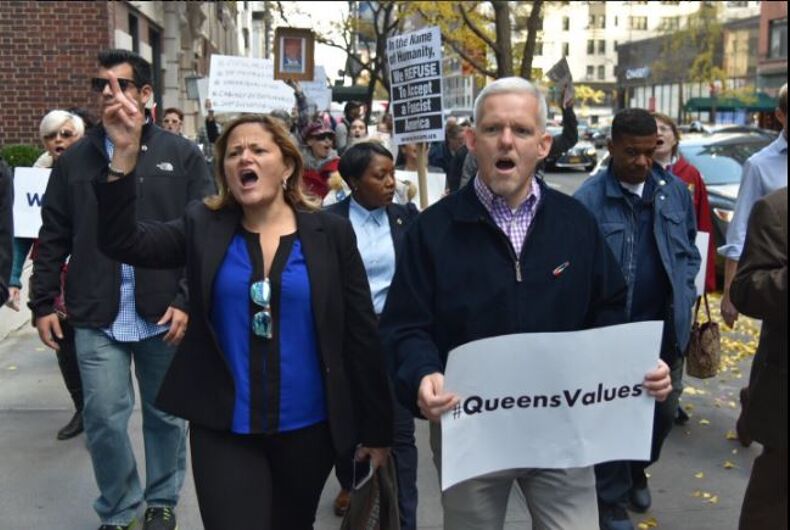 Van Bramer did not back down in the face of intimidation, going ahead with the planned march on Saturday, along with about 500 other concerned citizens who wish to show that Donald Trump’s rhetoric against minorities and the most vulnerable among us does not represent their city’s values.

The crowd marched across Queensboro Bridge, holding signs with messages like “We Rise” and “Queens Values.”

And if you wondered what it looked like from the air, here is a great photo, taken by #NickStaib. So proud of this moment! #QueensValues pic.twitter.com/SbZaQ3msjD

Eventually finding their way to Trump Tower, where they made their dissent known loud and clear.

There may be times when we are powerless to prevent injustice, but there must never be a time when we fail to protest!#QUEENSVALUES pic.twitter.com/CiycDJ8vt2

Van Bramer had received two emails from the same address, one threatening his life, reports the New York Daily News.

The email condemned him and “700 of your communistic socialists,” believed to be a reference to those who attended a meeting the night before to talk about hatred towards immigrants.

“Where did you get that [expletive] idea?” the email asked.

“Rest of the people from Queens do not agree with your homosexual lifestyle, so get the [expletive] out of this country, you [expletive] traitor! I will keep a close eye on your every moves so that when it’s time to execute traitors I will try my best so that your name is included in that list of traitors. Execution is the penalty for a traitor, that is the Law of This Land!,” it continued. “I know that you are a gay man and you can do whatever you want at your own privacy. But don’t push your agenda to other normal males and normal kids as we find that pretty disgusting.”

The Hate Crimes Task Force is investigating the incident.

Watch video from the protest below.

The Southern Poverty Law Center has logged hundreds of instances of abuse, intimidation, and harassment post the election.