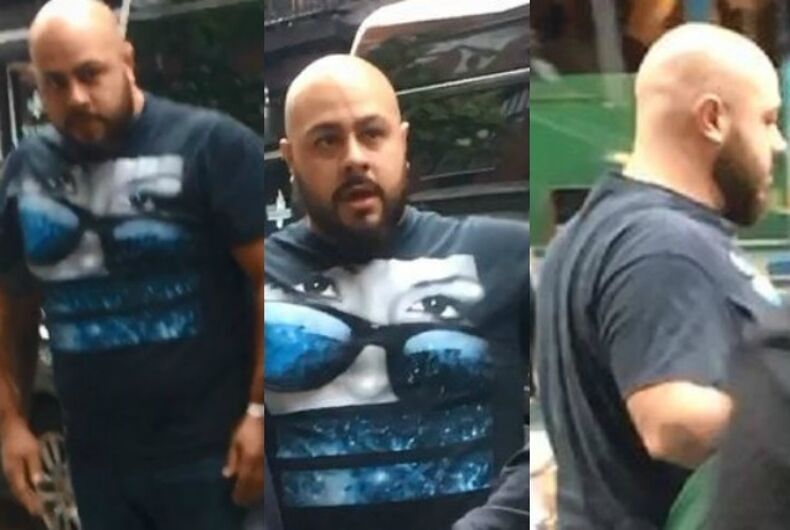 Police are looking for this man.Photo: DCPI

Police are looking for a man captured on video shoving another man headfirst into a restaurant window in New York City’s West Village. They believe he was shouting homophobic slurs during the attack.

They say the victim is a 32-year-old man and that he was walking on West 4th Street between Jones and Cornelia streets just after 5:30 p.m. on Sunday, October 2nd when the attack occurred, reports Gothamist. They claim the man caught on surveillance video is in his mid-20s and approached the victim and began yelling homophobic slurs. He then allegedly pushed the other man from behind, causing him to fall and hit his head on the window frame of Las Ramblas, a tapas bar at 170 West 4th Street.

NYPD said they do not know what motivated the attack or what slurs were yelled. They have released photos and video in order to help in locating the man accused of committing the antigay violence.

The Daily News reports the suspect allegedly shouted “faggot” and “nigger” before pushing the victim into the window.

The victim was taken to Beth Israel Hospital, where he was treated and released for a head laceration and general pain. “It required a staple, so it was quite a big laceration,” an NYPD spokesman said.

The suspect is believed to be about 6’0″ tall and 240 pounds. He was last seen wearing a black t-shirt, black pants, and black sneakers.

Anyone with information in regards to this incident is asked to call the NYPD’s Crime Stoppers Hotline at 1-800-577-TIPS (8477) or for Spanish, 1-888-57-PISTA (74782). The public can also submit their tips by logging onto the Crime stoppers website atWWW.NYPDCRIMESTOPPERS.COM or by texting their tips to 274637 (CRIMES) then enter TIP577. All calls are strictly confidential.