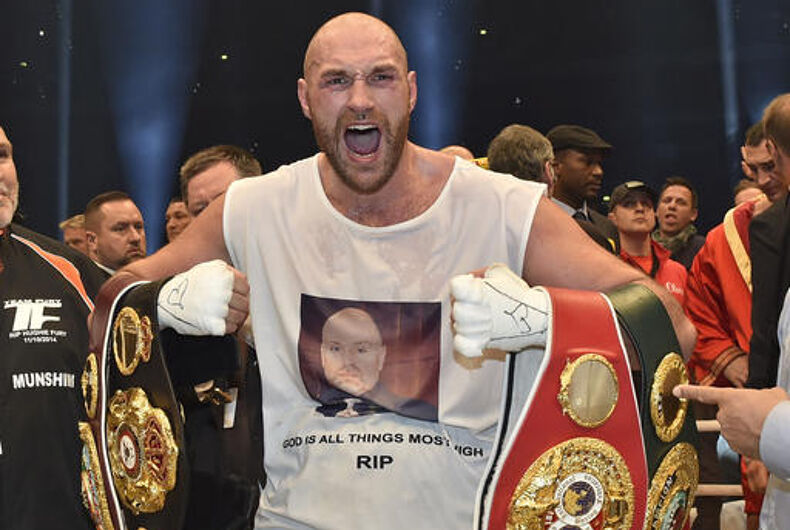 FILE - In this Nov. 29, 2015 file photo, Britain's new world champion Tyson Fury, celebrates with the WBA, IBF, WBO and IBO belts after winning the world heavyweight title fight against Ukraine's Wladimir Klitschko in Duesseldorf, western Germany. Fury has vacated his WBO and WBA world titles to concentrate on his treatment and recovery from drug use and other personal issues. Fury’s promotors released a statement early Thursday, Oct. 13, 2016, confirming the decision. It comes in the wake of his second withdrawal from a rematch with Wladimir Klitschko after being declared "medically unfit" and following his admitted bingeing on cocaine and alcohol. Photo: AP Photo/Martin Meissner, File

Fury’s promoters said the 28-year-old boxer was giving up his WBO and WBA belts with immediate effect to focus on treatment and recovery from drug use and other personal problems.

Hours later, the British Boxing Board of Control said Fury had been temporarily relieved of his license “pending further investigation into anti-doping and medical issues.”

The unbeaten Fury has not fought since beating Wladimir Klitschko in November 2015 to claim the WBA, WBO and IBF titles in one of the most stunning heavyweight upsets in recent times. He has twice pulled out of a rematch with Klitschko, most recently ahead of the rearranged Oct. 29 bout after being declared “medically unfit” by his team.

“I’m unable to defend at this time and I have taken the hard and emotional decision to now officially vacate my treasured world titles and wish the next in-line contenders all the very best as I now enter another big challenge in my life which I know, like against Klitschko, I will conquer,” Fury said in Thursday’s statement.

“I feel that it is only fair and right and for the good of boxing to keep the titles active and allow the other contenders to fight for the vacant belts that I proudly won and held as the undefeated heavyweight champion of the world,” he said.

In an interview with Rolling Stone magazine this month, Fury said he has been bingeing on cocaine and alcohol to cope with manic depression.

“I’ve been out drinking, Monday to Friday to Sunday,” Fury said. “I’ve taken drugs, cocaine, on many, many occasions for the last six months.”

In the interview, he also described himself as a “manic depressive” and said: “I just hope someone kills me before I kill myself.”

The WBO said Monday that it had received a report from the Voluntary Anti-Doping Agency in the United States showing that Fury failed a drug test on Sept. 22. The body also said it received information from the British boxing board that Fury refused to be drug-tested last month ahead of the postponed Klitschko fight.

Fury’s promotional company, Hennessy Sports, said the titles were being vacated “out of respect for the governing bodies, the sport of boxing and the heavyweight division.”

The statement said the break will also allow Fury “the time and space to fully recover from his present condition without any undue pressure and with the expert medical attention he requires.”

Fury was stripped of the IBF belt soon after beating Klitschko, for not fighting a mandatory challenger. That belt is now owned by fellow Briton Anthony Joshua, who could fight Klitschko for the vacant heavyweight titles.

Negotiations between the two camps are underway.

Fury has constantly said that he feels he didn’t get enough credit for ending Klitschko’s near-decade-long reign as champion, claiming it was partly because of his Gypsy heritage.

However, his image has been stained by controversial comments and tweets he has made in recent years about women, homosexuality and doping.

Fury’s trainer and uncle, Peter Fury, said last month that the fighter was at an “all-time low.”