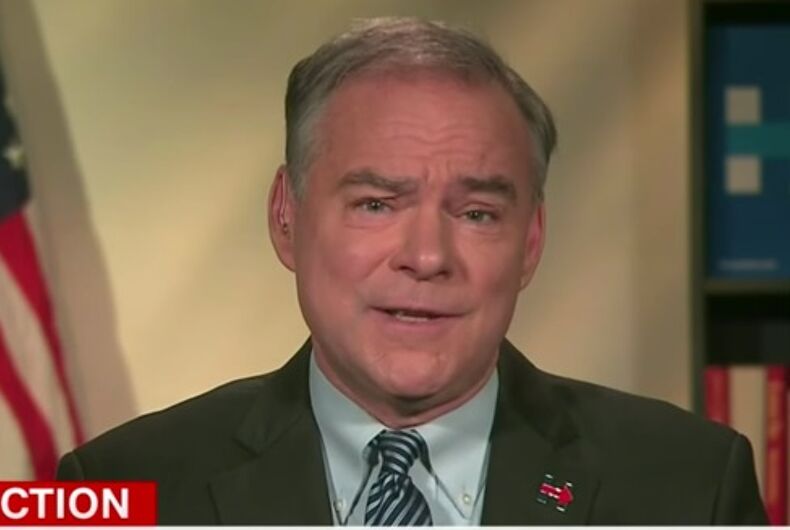 During a CNN appearance today, Tim Kaine pushed back on criticism that he didn’t attack his rival, Indiana Governor Mike Pence, during the vice presidential debate for his positions on LGBT rights. No questions specifically about LGBT rights have been asked during any of the debates so far.

Pence is one of the country’s most homophobic politicians. Last year Pence signed the state’s controversial Religious Freedom Restoration Act; the law allowed businesses to refuse to serve LGBT customers. Pence signed the bill into law surrounded by a cadre of extreme religious right leaders during a ceremony citizens and press were prevented from seeing.

After a national outcry that cost the state millions of dollars, Republican legislators managed to pass a “fix” to the law to specifically say it couldn’t be used to deny service to LGBT people in general and Pence – who had bumbled his way through defending the law in a manner similar to his defense of Donald Trump during the debate – reluctantly signed it.

“Well, it is the case that there was no question that was asked that dealt with Governor Pence or just the issue of LGBT equality,” Kaine said during the interview. “Hillary and I are strongly for LGBT equality, including marriage equality, and a Trump-Pence ticket is deeply against it, especially Governor Pence.”

Enjoy your Halloween eye candy: drag parody of ‘Thriller’ is a real treat

Hillary Clinton: ‘We need to stop the violence and save LGBT lives’