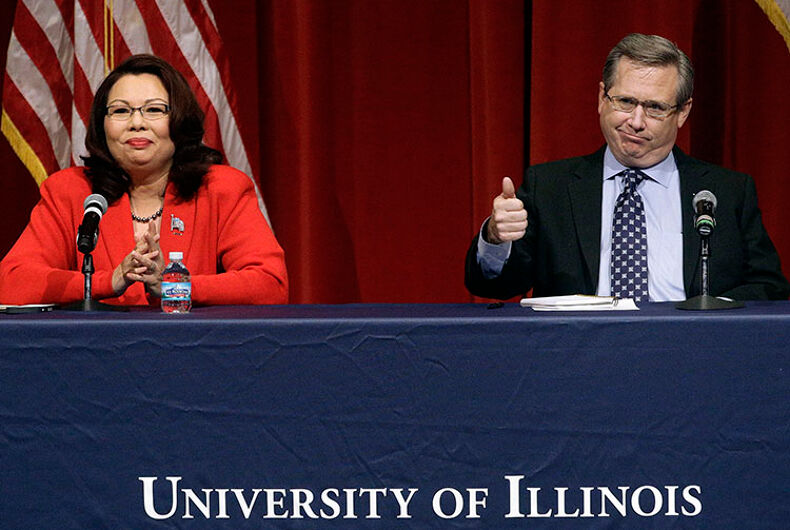 One day after getting pounded in social media for holding firm to its endorsement of Republican Sen. Mark Kirk of Illinois, the Human Rights Campaign reversed course Saturday and revoked its support, announcing it would now back Rep. Tammy Duckworth, Kirk’s Democratic opponent.

“After careful consideration, HRC’s Public Policy Committee of the Board of Directors has taken the unprecedented step — a first in our 36-year history — of revoking an endorsement.”

“We endorsed the sitting Senator, Mark Kirk, because he has been a strong supporter of our cause time and again, scoring a 100 percent on HRC’s most recent Congressional Scorecard. But events this week have gone beyond the pale for our standards of leadership.”

The endorsement of Kirk in March in and of itself raised eyebrows, but when the GOP senator made a racist comment during a debate with Duckworth Thursday night, the calls for HRC to rethink and withdraw its endorsement grew to deafening levels on Twitter.

During their Senate debate in Springfield, Ill., Duckworth spoke proudly of how her family has “served this nation in uniform going back to the Revolution.”

Kirk quipped he had “forgotten (that her) parents came all of the way from Thailand to serve George Washington.”

HRC president Chad Griffin addressed that remark in the post on Medium, titled, “An Open Letter.”

“Senator Kirk’s comments about his opponent’s heritage were deeply offensive and racist. His attempt to use Congresswoman Tammy Duckworth’s race as a means to undermine her family’s American heritage and patriotism is reprehensible. Yesterday, Senator Kirk tweeted an apology that failed to adequately address the real harm and magnitude of his words. So today, following a vote by our board’s committee, the Human Rights Campaign withdrew our support of Senator Kirk.

“Attacking someone because of her race and ethnicity is inexcusable for anyone, but especially for a sitting U.S. Senator. The diversity of our movement is our greatest strength, and Senator Kirk’s remarks were an affront to our most fundamental values. We have therefore voted to endorse Congresswoman Tammy Duckworth, who has been a strong LGBTQ ally in the House of Representatives, and HRC will contribute the maximum amount to her campaign.”