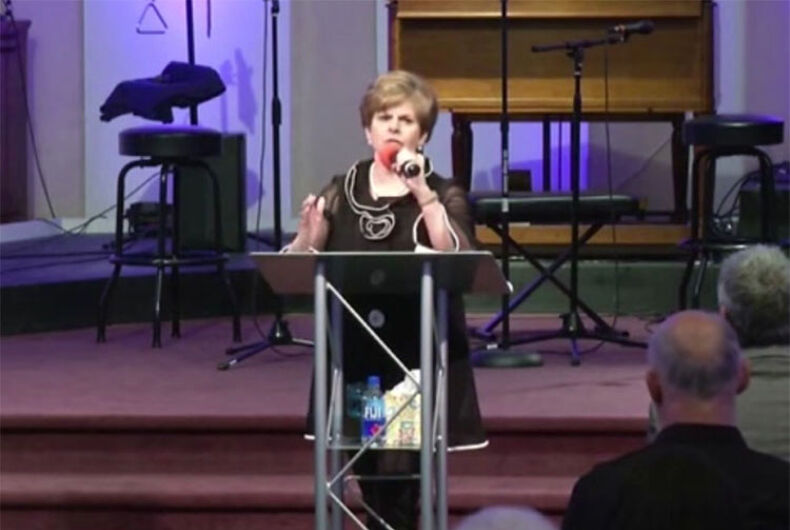 Poor Cindy and Mike Jacobs. The self-proclaimed Christian “respected prophet” and her husband told an assembly of like-minded folks at a church in Ohio that they feel obligated to apologize to the world “for actions taken by the leadership of the United States of America” in standing-up for LGBTQ rights.

And the focus of their talk last week at the church run by Donald Trump’s pentecostal vote wrangler Frank Amedia was to urge those in attendance to use their vote next month to stop the “promotion of homosexuality.” And of course, to make a video of that plea that has been viewed a less-than impressive 1,461 times.

As the Jacobs tell it, they are forced to repent for the pro-LGBTQ stance taken by our ambassadors. On the video, Mike Jacobs said they discovered a gay Pride flag flying outside the U.S. embassy in Costa Rica on a recent missionary trip. “That embassy represents you,” he shouted, as he displayed a photo showing its rainbow stripes waving. “Are they representing you when they do that?”

His wife and prophet Cindy picked up on that theme, regaling the small crowd with the complaints of local Christian leaders in Costa Rica, who she said “were all complaining to us about America and what we’re doing, how the ambassadors that were chosen were homosexual couples that were put in and sent into all the schools of their country, even though it was against their laws to have same-sex marriages and they were mad at us because we’re polluting their nations.”

But according to Right Wing Watch, the ambassador to Costa Rica is S. Fitzgerald Haney, a Tennessee native who’s called both Chicago and Englewood, N.J. home — and is not gay. He and his wife, a rabbi, have four children. Seems another apology might be in order, but Jacobs did make a point that applies to both supporters and opponents of LGBTQ rights:

“It matters who you vote for because who you vote for will put ambassadors in that will be our voice in the nations,” she said. “So we began shooting off emails, Mike did and and I did, to people we know in the U.S. and the next day that gay flag was down.”

Or so they claim. LGBTQ Nation reached out to the ambassador’s staff for confirmation and were told by phone that the Pride flag flew for the entire month of June, and was removed at the end of the month as scheduled, not a day sooner. So it’s possible the Jacobs sent their complaint emails on the last day of June, and that’s why the flag was down the very next day? So far, they’re not saying.