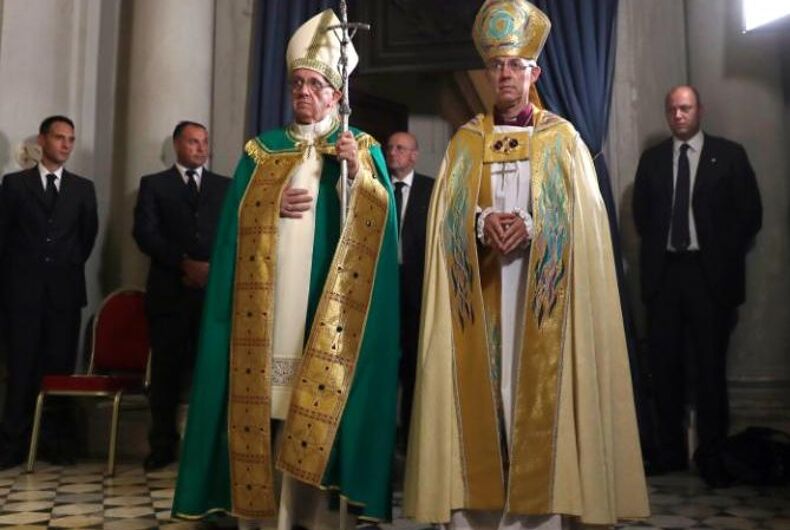 There’s new fuel for the familiar refrain of antigay religious zealots to “blame the gays” for everything from catastrophic natural disasters and destructive weather to political strife and moral lapses: marriage equality is one of two major roadblocks standing in the way of healing the centuries-old split between the Roman Catholic Church and the Church of England.

Pope Francis welcomed Anglican Archbishop of Canterbury Justin Welby to the Vatican for talks marking the 50th anniversary of the first step toward reunification. The two church leaders issued a joint statement declaring they were “undeterred” in their desire to repair the nearly-500-year-old rift, as PinkNews reported.

But after praying together wearing their most fabulous holy dresses, Francis and Welby revealed decades of progress to reach common ground on the major areas of disagreement had not resolved the still “serious obstacles” to putting the band back together.

“Much progress has been made concerning many areas that have kept us apart,” the men said in their joint statement. “Yet new circumstances have presented new disagreements among us, particularly regarding the ordination of women and more recent questions regarding human sexuality.”

That part of the statement was a deliberately vague reference to the battle now being waged within the Church of England over the blessing of same-sex marriages and gay bishops, according to The Telegraph.

The other stumbling block is how the Church of England and other Anglican provinces approve the ordination of female clergy, which Roman Catholics see as a fundamental breach with scriptural teaching of an unbroken line of male succession from the original 12 apostles.

But as the newspaper reported, the leaders vowed they would work to resolve these theological differences with the hope that God would “open new doors.”

Preacher: vote to stop U.S. from ‘polluting’ other nations with LGBTQ agenda