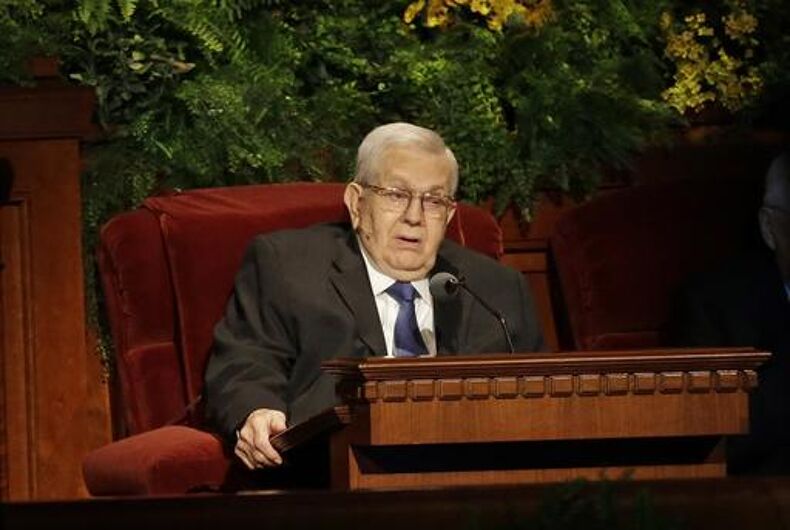 FILE - In this April 6, 2014, file photo, Mormon leader Boyd K. Packer, president of the Quorum of Twelve Apostles, of The Church of Jesus Christ of Latter-day Saints, addresses the 184th Annual General Conference of The Church of Jesus Christ of Latter-day Saints, in Salt Lake City. In 15 videos posted online Sunday, Oct. 2, 2016, during the final day of the religion's twice-yearly conference, Mormon leaders discussed concerns about the growth of the gay rights movement and heard from a former U.S. senator and church member who tells them the Iraq war could open the door for new converts, according to the footage that pulls back the curtain on a religion that is closely guarded about its inner workings. Photo: (AP Photo/Rick Bowmer, File)

SALT LAKE CITY (AP) — In leaked videos, Mormon leaders discuss concerns about the growth of the gay rights movement and hear from a former U.S. senator and church member who tells them the Iraq war could open the door for new converts, according to footage that pulls back the curtain on a religion that is closely guarded about its inner workings.

The 15 videos were posted online Sunday during the final day of the religion’s twice-yearly conference. They show top leaders hearing presentations and discussing topics at meetings from 2007 to 2012.

The Salt Lake City-based Church of Jesus Christ of Latter-day Saints says the videos show briefings that senior church leaders receive from religious, political and other experts on a number of topics.

“The purpose is to understand issues that may face the church, and is in pursuit of the obligation church leaders feel to be informed on and have open discussion about current issues,” spokesman Eric Hawkins said in a statement.

Church officials didn’t provide further details, but the videos don’t appear to be secretly recorded. They were most likely videotaped so leaders not in attendance could watch, said Matthew Bowman, a Mormon scholar.

Though the videos don’t reveal information that is necessarily surprising or damning, they have generated widespread interest because people are curious about how the religion’s top leaders — considered apostles — make decisions, Bowman said.

“It doesn’t matter necessarily what the content is, it’s looking behind the veil that gets people excited,” said Bowman, associate professor of history at Henderson State University.

The leaked videos come nearly a year after an internal memo about banning baptisms for children of parents in same-sex marriages was released by a Mormon who had been excommunicated.

A message to the person who posted the videos was not immediately returned.

In a 2011 meeting, the conversation turned to gay issues after leaders heard a report about cybersecurity issues and how WikiLeaks had published diplomatic cables leaked by Chelsea Manning, a transgender former Army intelligence analyst.

“I’m suspicious that the news media cover up anything involving homosexuals when it would work to the disadvantage of the homosexual agenda,” says Dallin H. Oaks, a member of the church’s highest leadership council, the Quorum of the Twelve Apostles. “I just wondered if there was some of that in this.”

In another video three years earlier, the conversation turned to gay rights during a presentation about the results of November 2008 elections. Another member of the Quorum of the Twelve, Boyd Packer, asked how the gay and lesbian coalitions were moving forward. The Mormon church was a major backer of California’s gay marriage ban that passed that year.

“They will be very aggressive. Frankly, they are very smart in their usage of the media,” Magleby said. “If this becomes a vote of the gays versus the Mormons, we are going to lose twice. … They are choosing to disparage us because in the public eye, we’re less understood and more negatively viewed than are African-Americans or Latinos or the Catholic Church.”

Shortly after he left the U.S. Senate in early 2009, Gordon Smith, an Oregon Republican and a Mormon, told church leaders that he voted for the Iraq war “because I felt the Lord’s hand in it.”

He said that if the war ultimately succeeds, “there will be an opportunity to begin building the church in the Middle East, which is a deeply troubled place.”

In response to a church leader’s question about the biggest threats of concern to the faith, Smith first listed “secularism, which is fueled by socialism,” followed by weapons of mass destruction in the hands of “a fanatical branch of a great religion.”

Smith also discussed how devout Mormons in the Senate and other public office offer the church access and influence.

He describes how a former Indian ambassador to the U.S. helped him secure 200 visas for Mormon missionaries to establish “a pattern of dealing” in order to circumvent Indian bureaucracy. He suggests they use other Mormon senators — Mike Crapo of Idaho, Orrin Hatch and Bob Bennett of Utah, and Harry Reid of Nevada — in similar ways.

After the church faced backlash for supporting California’s gay marriage ban, he suggested the church lower its profile by working with leaders of other faiths who have strong ties to lawmakers who are able to kill legislation they find threatening.

How does Tim Kaine’s religion influence his positions on LGBT rights?