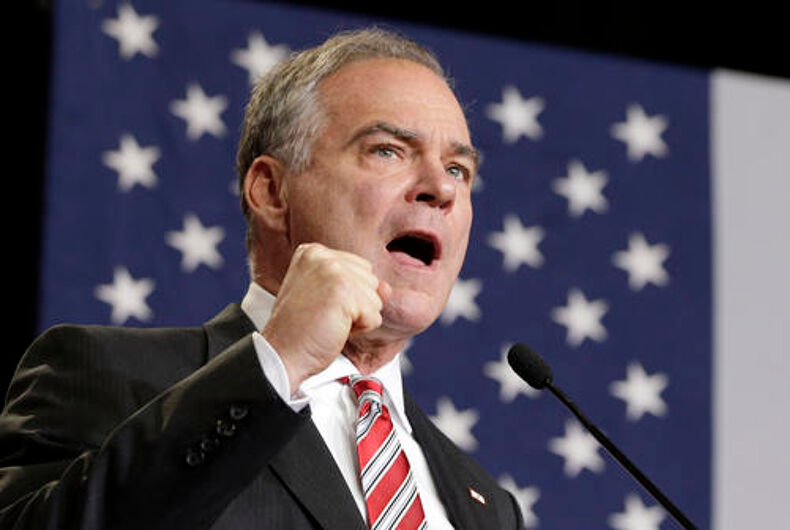 RALEIGH, N.C. (AP) — The morning after Tim Kaine was named the Democratic vice presidential nominee, his first stop wasn’t a rally or a swing state meet-and-greet — it was a church in Richmond, Virginia, where he and his wife have worshipped for 30 years.

He prayed, sang a solo and briefly avoided talk of politics.

Kaine has long balanced religion and politics, in his private life and his public one as Virginia’s governor and senator. At times, his Catholicism has run directly against his governing choices. Kaine is morally opposed to the death penalty but signed off on 11 executions during his four years as governor. After opposing gay marriage in his 2005 gubernatorial run, he later broke with the church to support it. He’s personally against abortion but has consistently voted in favor of abortion rights.

“How many of us are in the church and are deeply serious about our faith and agree with 100 percent of church doctrine?” Kaine told the National Catholic Reporter in August. “I would argue very few Catholics are in that position. We’re all working out our salvation with fear and trembling.”

The campaign didn’t make Kaine available for an interview with the Associated Press.

Kaine squares off Tuesday against Republican Indiana Gov. Mike Pence in the only vice presidential debate of the election. Pence is an evangelical Christian who, like Kaine, is open about the influence of his faith on his political life. Pence has been prone to act politically based on his faith, including fighting against Planned Parenthood funding while in Congress and signing a state law that many people saw as allowing discrimination against gay people.

Kaine, for his part, ran ads on Christian radio during his 2005 gubernatorial bid. “I oppose gay marriage, I support restrictions on abortion,” he said in one.

Now as a U.S. senator, he co-chairs the chamber’s bipartisan prayer breakfast. Every day while campaigning, he mentions the transformative year he spent as a missionary with the Jesuits in Honduras from 1980 to 1981.

“I would argue he probably has been one of those Democrats who has been the most comfortable in his own skin generally, and particularly when it comes to issues of faith,” said Mo Elleithee, a former Democratic strategist and former longtime Kaine staffer.

His most public test of faith centered on the death penalty. As a Catholic and longtime civil rights lawyer, Kaine staunchly opposes the death penalty and even defended several death row inmates.

But Virginia has performed one of the highest numbers of executions. In 2005, Kaine’s Republican opponent, Jerry Kilgore, ran an ad featuring the father of a murder victim of one of Kaine’s death row clients, saying Kaine couldn’t be trusted to uphold the law.

In a direct-to-camera appeal, Kaine pushed back.

“My faith teaches life is sacred,” he said, before adding, “as governor, I’ll carry out death sentences handed down by Virginia juries, because that’s the law.”

And he did. As governor, Kaine oversaw 11 executions, granting clemency only once. Wayne Turnage, Kaine’s former chief of staff, said the typically upbeat Kaine would retreat to his office to be alone for hours on the days executions occurred.

“You could sense a significant change in his demeanor,” Turnage said. “The office was a lot quieter, you could tell he was in a more pensive mood.”

Gay marriage, too, posed tension between Kaine’s faith and his political beliefs. In September, Kaine recalled before a dinner of the Human Rights Campaign, an organization that advocates for LGBTQ equality, that he opposed gay marriage because of his Catholicism until about a decade ago. Kaine changed his tune when Virginians, in 2006, were voting on a constitutional amendment to keep marriage between one man and one woman. Kaine opposed it, but it passed. Now, he’s a strong proponent of furthering LGBT rights.

“I had a difficult time reconciling that equality, which I knew to be true from the experience of my own life, with the teachings of the faith that I had been raised in my entire life,” he said at the dinner.

On abortion, Kaine breaks from Clinton on the Hyde Amendment, which bans federal money from covering abortions. Kaine supports it, but Clinton would push for repeal if elected.

Some critics charge Kaine highlights his faith when it’s most politically helpful.

“We’d see a different Tim Kaine depending on what crowd he was with,” Kilgore, Kaine’s former Republican opponent, said.

And some conservative Catholic groups are openly skeptical about Kaine’s year in Honduras. There, he learned the teachings of “liberation theology,” which advocates the church’s political involvement to improve the lives of the poor. Critics charge the movement has Marxist and socialist underpinnings.

But to his allies and observers, Kaine’s honesty and candidness about his faith is partly what’s kept it an asset, not a liability.

“His religious devotion has always been a big part of his public persona,” said John McGlennon, a government and public policy professor at Virginia’s College of William and Mary. “He does have a very good way of connecting with voters so that they can see something of themselves in him.”