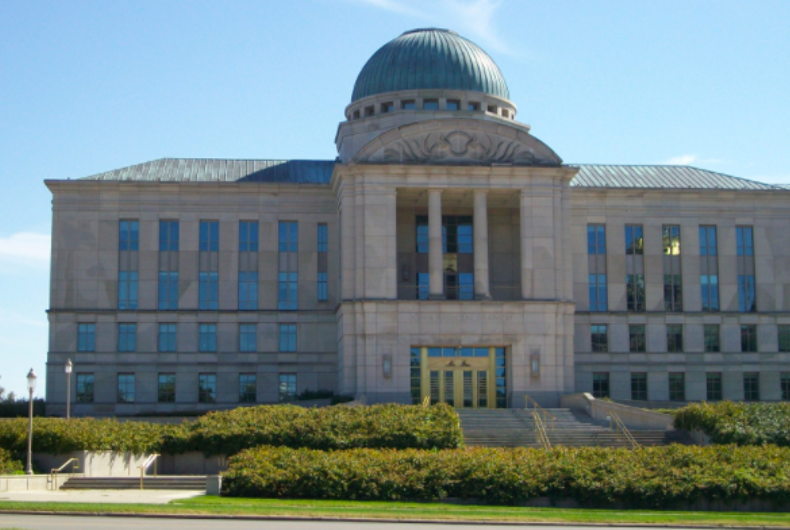 DES MOINES, Iowa (AP) — Three Iowa Supreme Court justices who helped legalize gay marriage in the state seven years ago will face voters on Nov. 8 for the first time since the ruling, but they are refusing to campaign for their jobs because they argue the courts should remain above politics.

The justices up for retention votes in next week’s election are taking the same approach as three judges who appeared to pay a price for their stands when voters in 2010 removed them from office after a costly campaign waged by gay marriage opponents.

The judges now on the ballot have said little about the vote, but two of those removed from the court told The Associated Press they don’t regret their choice not to campaign even though they knew opponents were organizing a high-profile effort to oust them.

“I think it’s dangerous when politics are injected into the courts and I think that is what happened in 2010,” former Chief Justice Marsha Ternus said. “If voters vote on judges or justices based on their views of issues rather than what the law requires, what they’re telling judges to do is to ignore the law when popular opinion wants them to do so. Then, we’re not a country based on the rule of law and that’s a dangerous path to go down.”

Ternus, along with justices Michael Streit and David Baker, failed to receive the majority vote needed to remain in office for another eight years. Each of them received less than 45 percent, marking the first time Supreme Court justices were removed from office by voters since the retention system was established in 1962.

The three justices in 2009 had joined in a unanimous 7-0 ruling that found a ban on same-sex marriage violated the state constitution, making Iowa the third state to legalize the practice. At the time, 29 states had constitutional bans on gay marriage and the issue remained highly contentious throughout the country.

Like Ternus, Baker said he didn’t regret not campaigning.

“If you’re going to do that you have to go out and solicit funds and, whether you do or you don’t, the perception is that you owe somebody,” Baker said. “I’m still of the belief that politics and judges are a bad mix.”

Gay rights opponents led by Christian conservative Bob Vander Plaats raised $1 million in their successful campaign against the justices in 2010.

Gay rights opponents led again by Vander Plaats failed to remove Justice David Wiggins when he was up for a vote in 2012. Wiggins, who joined in the gay marriage decision, received more than 54 percent of the vote and remains on the bench.

In the upcoming election, Chief Justice Mark Cady and Justices Daryl Hecht and Brent Appel will be on the ballot. None has campaigned, but Cady released a letter last week that stated, “I believe campaigns for judicial office only open the door of a court system to the influence of politics and money. This door must never swing open.”

There hasn’t been a high-profile effort to remove justices this year. That’s likely in part due to the U.S. Supreme Court ruling last year affirming that state bans on same-sex marriage are unconstitutional, a decision that seemed to vindicate the Iowa ruling.

“I think obviously the nation has become more comfortable with the concept,” Baker said. “It certainly has been made clear from a constitutional basis ours is the correct decision.”

Vander Plaats declined to comment through a spokesman, but he wrote an Oct. 21 column in The Des Moines Register that encouraged Iowans to vote “no” on the justices whose opinion he said served to “foist homosexual marriage upon our state.”

His organization’s political action committee has donated money to a group called Common Sense PAC, which has placed yard signs around the state asking voters to reject the three justices.

Des Moines attorney Guy Cook, the past president of the Iowa State Bar Association and an advocate of judicial independence, has worked with a bar association committee since 2012 on behalf of judges who feel they can’t campaign. The goal is to educate voters on why Iowans amended the state constitution decades ago to create a new system for hiring judges.

“It was designed to get higher quality judges on the bench based on merit and to remove the influence of politics and not have judges issue rulings in return for votes,” he said.

The Great Gay Holiday: A celebration of Halloween’s LGBTQ influence