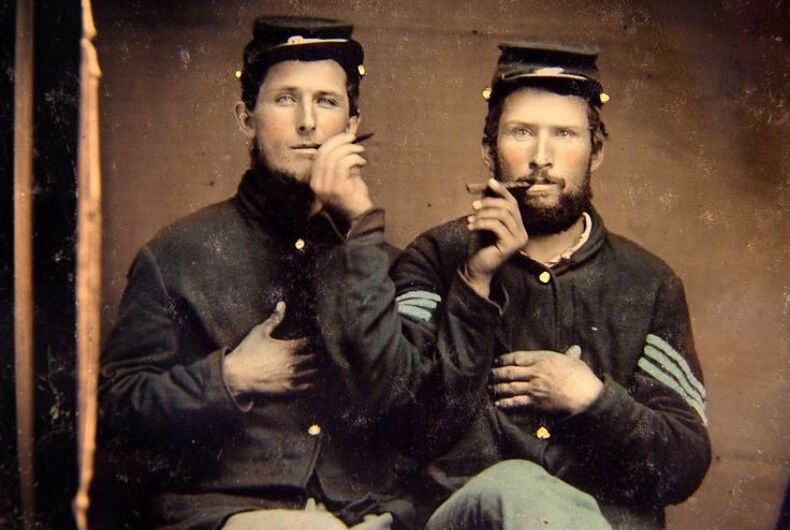 Queer Civil War buffs have been arguing for some time that the deafening silence around LGBTQ Confederate and Union soldiers indicates proof of their very presence.

During the commemoration of the 150th anniversary of the start of the American Civil War, I went combing through Civil War annals for our queer brethren – and I found them! When shots were fired from Fort Sumter, a fortification near Charleston, S.C., signaling the war’s beginning, its gay Confederate and Union soldiers didn’t have to worry about the modern infamous DADT policy, which blatantly discriminated against gay, lesbian and bisexual servicemembers.

Those soldiers did not have to bear their souls to disprove that military readiness is a heterosexual calling, nor did they have to prove that their patriotism to the cause was diminished because of their sexual orientation.

Some queer Civil War buffs would argue that none were dishonorably discharged – although, there is record of three pairs of Navy sailors court-martialed for “improper and indecent intercourse with each other.” And “unit cohesion,” the big battleground issue during the fight to repeal DADT which posited that the “homosexual gaze” would be the root cause for disruption (which was totally debunked by a 2002 study), was not an issue.

But the question, some would argue, of who were LGBTQ service members and who weren’t in the American Civil War is a disingenuous query since the words “homosexual” and “heterosexual” weren’t part of the American lexicon until thirty years after the war ended.

However, many would also argue that not having a word like “homosexual” back in the day of the Civil War to depict same-sex attraction among soldiers does not negate our use of it to describe them in this present day.

And in combing through Civil War battle records of Confederate and Union soldiers, I find, they were not only slaughtering one another – many were also loving one another.

Learning about same-sex love among soldiers wasn’t Thomas P. Lowry’s focus when he sat out to pen The Story the Soldiers Wouldn’t Tell: Sex in the Civil War, the first scholarly study of the sex lives of soldiers in the Civil War.

This physician and medical historian reminds me of Alfred Kinsey in his research on human sexuality. Using archival documents such as court-martial and medical records, newspaper articles, pornographic books and cards, and letters and diaries of the soldiers, Lowry’s focus was to address the problem of prostitution – straight and gay – and why both the Union and Confederate Armies had to work to stop sexually transmitted infections from crippling their soldiers, because STIs were costing more in soldier’s health and lives than action on the battlefield.

Chapter 11 of Lowry’s book opens the closet door on gender-bending and same-sex trysts. And Lowry reveals that during the Civil War conventional gender roles and sexual behavior could not be strictly tethered to a heterosexual paradigm. With men outnumbering women, especially at social events like balls, drummer boys – children as young as nine and ten-years-old, dressed in drag. And in some occasions, the intimacy between soldiers and drummer boys reached beyond just a public waltz.

For example, Lowry references a ball put on by a Massachusetts regiment stationed in Virginia in 1864 about young drummer boys dressed as women. One man wrote to his wife: “Some of the real women went, but the boy-girls were so much better looking that they left. …We had some little Drummer Boys dressed up and I’ll bet you could not tell them from girls if you did not know them. …Some of [the Drummer Boys] looked good enough to lay with and I guess some of them did get laid with. …I know I slept with mine.”

History proves that LGBTQ servicemembers have been proudly and openly putting our lives on the line for their countries since antiquity.

The Greeks favored gay and bisexual young men in their military. Since gay and bisexual men were considered a family unit, the Greeks knew that paired male lovers assigned to the same battalions were a military asset. They would fight courageously, side by side, and would die heroically together in battle. Alexander the Great, who was king of Macedonia and noted as one of the greatest military conquerors, was known to be bisexual. When his lover Hephaestion died in battle, Alexander the Great not only mourned openly for his lover, but he staged an extravagant funeral, which took six months to prepare.

Lowry wasn’t the first to write about Confederate and Union soldiers in the Civil War, but he was the first to recognize an LGBT presence in it.