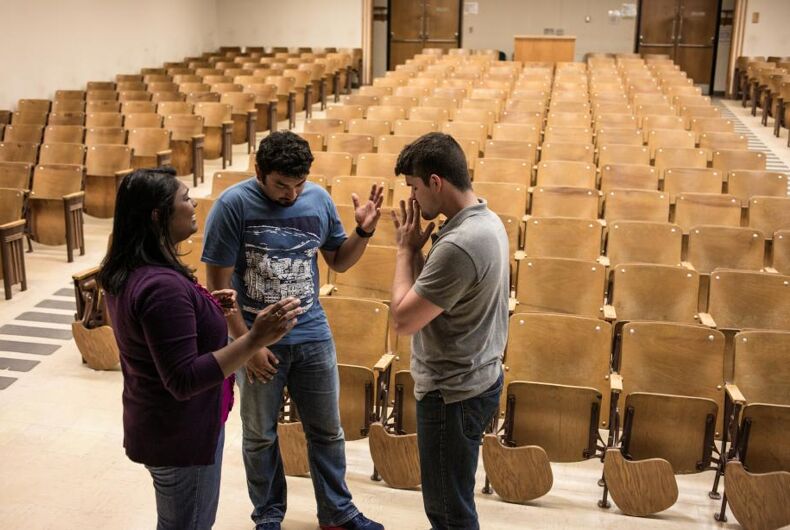 NEW YORK (AP) — One of the largest evangelical college ministries in the U.S. has asked any staff members who support same-sex relationships to quit, a move critics call a purge and supporters laud as an affirmation of true Christianity.

InterVarsity Christian Fellowship informed all staff about the policy over the summer after issuing a position paper based on their three years of study of sexuality that concluded sex should be reserved for marriage between a man and a woman. The organization’s leaders said employees are expected to “believe and behave” in accord with InterVarsity’s stand on sexuality, including not engaging in immoral sexual behavior or promoting positions that conflict with the group’s beliefs.

“If they disagree, we trust that they will alert their supervisors and conclude their work,” within two weeks, the leaders wrote in a letter the Madison, Wisconsin-based InterVarsity provided Friday to The Associated Press. “We expect that staff who continue to disagree will act with integrity and let their supervisor know.”

The new policy was first reported by TIME magazine, and prompted a swift backlash on social media, inspiring the hashtags #InterVarsityPurge and #InterVarsityDoBetter.

Russell Moore, head of the public policy arm of the Southern Baptist Convention, was among evangelical leaders who were surprised by the uproar.

“The policy they hold on human sexuality is the exact same view that has been held by every wing of the Christian Church for 2,000 years,” Moore said.

But Matthew Vines, author of “God and the Gay Christian” and an advocate for evangelical acceptance of LGBT people, called the policy “a recipe for institutional marginalization.” He noted that InterVarsity is known for fighting racism and supporting women in leadership positions, even though many evangelical churches only allow male leaders.

“This seems like it really runs counter to their justice stand to be proudly embracing injustice and to be intentionally and actively persecuting a marginalized group within their community,” said Vines, who was active in InterVarsity at Harvard University.

InterVarsity is the latest conservative Christian group, including charities and colleges, struggling to navigate a new environment in which a majority of Americans accept same-sex relationship and gay marriage is legal. According to a 2014 Pew Research Center study, 51 percent of younger evangelicals said homosexuality should be accepted, compared to 33 percent of evangelicals overall.

Two years ago, World Vision, a Christian aid agency, announced plans to hire Christians in same-sex marriages, then quickly reversed the decision when a large number of donors dropped the organization. In several U.S. Roman Catholic dioceses, parish workers and school teachers have been quietly fired over having same-sex spouses or supporting LGBT rights.

InterVarsity’s position is especially significant because of its reach. The group has more than 1,000 chapters on 667 American college campuses, with additional outreach programs for athletes, artists, nursing students and more. The organization has an influential publishing house, InterVarsity Press, and runs a missionary conference every few years that draws about 20,000 students. InterVarsity reported receiving $80 million in donations last year.

InterVarsity said some staff members already have left due to the new policy. Michael Vazquez, who is gay and led an InterVarsity chapter at the University of Utah, said he resigned three months ago after working unsuccessfully with a small group within the organization who pushed for a broader consideration of sexuality.

“I was concerned about my students,” the 25-year-old seminary student said in a phone interview. “I could not authentically reach out and tell them that they were loved by the ministry.”

In 2013, InterVarsity temporarily lost official recognition from the California State University system because the evangelical group required its leaders to be Christian in contrast to the system’s requirement that such positions to be open to all students. An agreement was later reached and InterVarsity regained recognition.

Critics of the new InterVarsity staff policy predict it will prompt more schools to re-examine the status of the evangelical ministry.

When Trump mocks people with disabilities, this is who he’s insulting