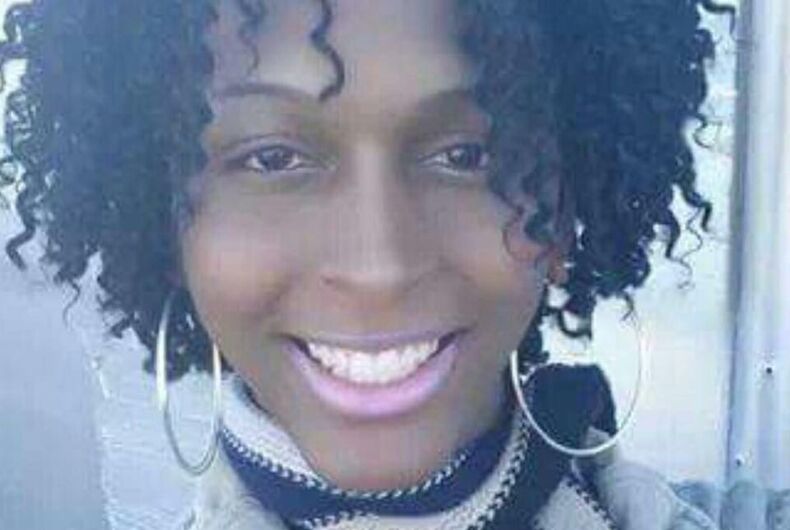 Transgender woman Jazz Alford was found shot to death in late September in Birmingham. Her death is the 22nd reported transgender homicide this year. Photo: Via Facebook

Alabama police are investigating a string of crimes against transgender women, including the 22nd reported transgender homicide of 2016.

Jazz Alford, 30, of North Carolina was found shot to death in a Birmingham motel room on September 23, according to AL.com. With her death, the number of known killings of transgender people in the United States so far this year has reached the total number for 2015.

Alford, an African-American trans woman, was initially misgendered by police. But her sister Toya Milan, who is also a transgender woman, told AL.com that her death has struck a huge blow to the local LGBT community.

“There was another transgender shot multiple times somewhere else recently. People think transgenders are monsters, when really we just want to be accepted,” Milan said. “[Jazz] was such a loving person and we didn’t know anybody that would want to hurt her. It’s been a hard pill to swallow.”

“She was a lovely, beautiful person. Always kind and smiling,” Alyssa Huggins recalled. “What a tragedy.”

Another former coworker, Sherri Johnson Pilson, shared that Alford was always quick to cover a shift.

“Whenever I needed Sundays off for church, Jazz would always cover me and say, ‘pray for me too chile!'” Pilson wrote. “Such a sweet person.”

Police said they don’t yet have a suspect or motive for her death. But they have arrested a person of interested in connection with another attack on a transgender woman in Birmingham, who police said was shot during a home invasion on Monday.

Daurius Foster, the boyfriend of the second shooting victim, told police he believes that the perpetrator shot her with a gun stolen in the recent robbery of another transgender woman, according to AL.com:

He also said he believes the suspect is the same person who robbed another friend of theirs at a Homewood motel. He said a gun was stolen in that incident, and he believed that gun was used to shoot his girlfriend today. Homewood police identified that victim as male, but Foster said the Homewood victim was a female.

Birmingham and Homewood police have said they do not yet know if the thefts or shootings are related.

The number of transgender people killed in the United States is an estimate precisely because of the frequency with which transgender women in are identified as men in reports of their deaths. It is often only after friends and family speak to the media that the true gender of these individuals comes to light.