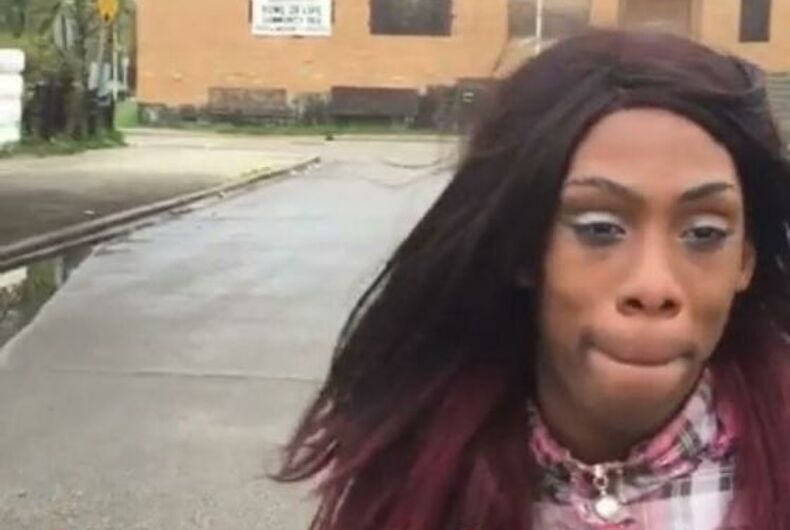 T.T. Saffore was killed on September 11, making her death the 20th reported transgender murder in the United States.Photo: Jaliyah Armstrong

Another transgender woman has been killed, this time in Chicago. A 20-something trans woman known as T.T. Saffore was found dead on Sunday, the Windy City Times reports.

According to The Advocate, police are treating the case as the homicide of a man, and deny that Saffore was transgender:

[Chicago Police Department News Affairs Officer Michelle Tannehill] repeatedly insisted that the police do not currently believe that the victim was a trans woman. She said police were proceeding with investigation of the case as a the homicide of a man, and had no suspects or potential motive at this time.

But Saffore was well-known in her local transgender community. Friends remembered her fondly at a vigil Monday in the neighborhood where she was found.

“You could be going through a bad day, but once you saw [T.T.], she was such a happy, cheerful person, all that changed,” Jaliyah Armstrong, told the Windy City Times.

Armstrong, who had known Saffore for seven years, said that her friend got into an fight with a woman who threatened to kill her shortly before she died.

“Three days before [her death] she got into an altercation with a [trans] woman on Madison,” Armstrong told the Windy City Times. “The girl pulled a knife on her and said ‘I’m going to get you killed.'”

Saffore didn’t report the incident, Armstrong said, because trans women on the West Side don’t trust the Chicago Police Department.

“People don’t know what we go though out here,” Armstrong said. “I just want justice for my friend. Trans lives matter. She is the third person killed around here and there is nothing done about it.”

She expressed concern that Saffore’s murder would remain unsolved, like those of two transgender women killed in Chicago in 2012.

“I think T.T. is going to get swept under the rug,” Armstrong said. That the police and local media misgendered Saffore doesn’t help. “I think the media did that on purpose. They could not say ‘transgender woman.’ That was just disrespectful of her life.”